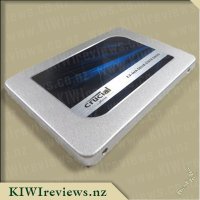 Disclosure StatementFULL DISCLOSURE: A number of units of this product have, at some time, been supplied to KIWIreviews by Crucial or their agents for the purposes of unbiased, independent reviews. No fee was accepted by KIWIreviews or the reviewers themselves - these are genuine, unpaid consumer reviews.
Available:
at selected retail outlets

Increase the speed, durability, and efficiency of your system for years to come with the Crucial MX300 SSD. Boot up in seconds and fly through the most demanding applications with an SSD that fuses the latest 3D NAND flash technology with the proven success of previous MX-series SSDs. Your storage drive isn't just a container, it's the engine that loads and saves everything you do and use. Get more out of your computer by boosting nearly every aspect of performance.

Instantly improve system performance
The Crucial MX300 reaches read speeds up to 530 MB/s and write speeds up to 510 MB/s1 on all file types so you can boot up almost instantly, reduce load times, and accelerate demanding applications with ease. Plus, our Dynamic Write Acceleration technology uses an adaptable pool of high-speed, single-level cell flash memory to generate blistering speeds throughout the drive's long life.

Entrust your files to a drive that lasts
With an endurance rating of up to 220TB total bytes written, the Crucial MX300 is engineered with Micron 3D NAND to deliver years of fast performance. The 3D NAND leverages larger NAND cells to improve performance and prolong endurance. Protect your data with AES 256-bit hardware-based encryption, RAIN technology, Exclusive Data Defence technology, and the durability inherent in SSD design.

At last... real storage at blazing speeds! Gone are the days of barely managing to fit a full install of Windows onto your SSD and leaving yourself scant room for the swapdisk, and loading all your apps and data onto a secondary (probably regular) hard-drive - that's like cramming a rugby team into a Bugatti, then hitching their tour bus onto the rear bumper and expecting it to win any races. This is even more the case with laptops and notebooks, who, until now, have had to make the Devil's Choice between having space or speed - finally, here's a drive that allows you to have both!

Another key factor is that being an SSD - with no moving parts to power - this unit is quite, and power-efficient. So, if your power supply is already pushing near its upper limits, upgrading to this baby means power savings too! Running at a mere 0.075W, you can run 10 of these babies on less juice than any regular hard-drive you care to point a stick at. In laptops, that means better battery life, lower heat-sink requirements and WAY less noise thanks to the lack of spinning drive motors.

The MX300 is a solid-looking beast, locked away in an aluminium case that can't help but make one think of something that's fallen back down a wormhole from a decade ahead, and it carries that future pricetag with it, ranging in at around $350 give or take, depending on your preferred retailer. Polling a few of the bigger stores and a number of smaller ones online, we found the price tends to vary between $330 in the bigger chains to $415 in some of the smaller stores.

Crucial's revolutionary 3D-NAND technology makes a lot of heavy promises about the read and write speeds... promises that seem pretty nigh on impossible to achieve in real-world conditions because the tests are always done under very strictly controlled conditions that never match anything outside of the lab. However, in a surprising twist, my own more-realworld-than-lab testing gave speeds very similar to the touted specs, with less than 20% variation across 16 read/write tests of various configurations. This gave my main system a blazing speed boost that took it from slug to superhero in a matter of a couple of hours.

This drive is a multi=-trick pony though, and while the spec sheets lists many features, with even more available when you download Crucial's Storage Executive app, there were some features I was reluctant to test on a main workstation. The RAIN system - which is a single-drive version of RAID, giving you redundancy and data-durability by storing it in multiple locations on the device so that minor corruptions can be worked around - is one that sounds brilliant in theory, but do to the urgent need for a new system drive in the office workstation, I didn't want to risk any hiccups causing the death of the main beastie. It also reduces your storage space, since you have to account for every byte needing 2,3 or even 4 bytes to store it with duplication. The drive is certainly big enough - 750MB will still give you a fair 200MB of working space - accounting for real-vs-decimal notation and duplication space requirements - but that's about what I had in there before and it was straining the edges a bit.

Drive encryption is something I have never worried about - I don't store any confidential files on my "work" machines anyway - so this was another feature that is great in theory but not tested by me in practice. This comes down, purely and simply, to me trying to stick to 'real world' scenarios. While it is undoubtedly true that there are people out there who have data requiring such technologies and precautions, I'm not one of them and neither are the greater majority of people who are going to find this drive a great idea to have - eg. Gamers, movie watchers and general web-surfers who are sick of slow HDDs causing system-drag.

The "Exclusive Data Defence" system - that protects key files from corruption by doing some mojo voodoo on the hardware itself - is something I can't test in a real-world scenario. The device would have to have a cascade of some key system features and a run of failures to trigger this, but if it is more than just empty hype, it's a revolutionary pit of tech that will make proud Mums and Dads happy that all their family photos (that they really should back up) are going to be safe and sound.

Overall, this drive pleased me no end, impressed me greatly, and has set the benchmark very high indeed. Apart from expanding this out to multi-terabyte versions, I really can't see how even Crucial are going to top this without somehow expanding things into a higher dimensional space. To make this unit available at the public level, at a price tag like this, is something remarkable and very worthy of attention... so get down to your nearest PC gear shop and order yourself one of these. it's something you're going to wish you could have done years ago!

Features:
•  High transfer rate for fast copying and downloading
•  Large storage capacity, up to 2GB
•  Built to last, with an operating shock rating of 2,000Gs, equivalent to a ten-foot drop
•  5-year limited warranty
•  Not all ... more...