If I Had An Elephant review 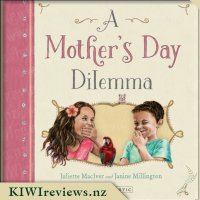 Queenly trinkets for her hair?
A royal pair of underwear?

Poor Prince Pierre and Princess Emma face a major muddlesome dilemma. What do you give your mother the Queen when she has absolutely everything?

I chose to review A Mother's Day Dilemma as Mother's day was approaching and my 3 children just love books. My first thought when viewing the cover was what a beautiful book, the two children on the front are beautifully illustrated very lifelike and I love the simplicity of the cover. The title is bold and stands out, and the floral boarder down the side adds a beautiful touch.

I love the story the book tells, basically it's about twin's Emma and Pierre trying to find the perfect mother's day present for their mother who is the queen. The queen has everything she could ever need or want, so they are left with the dilemma of trying to find the perfect gift. The book rhymes throughout which I feel is quite important with a children's book as it makes the story fun and engaging. They've gone on an adventure trying to find the perfect gift and then they come to the conclusion that it really doesn't matter what gift you give, it's the thought that counts which is a beautiful message to portray through a children's story. They eventually sit down to paint a rock each for their mother, and she is over the moon with their work of art.

Overall, I loved reading this book and the beautiful story it told. My favourite part was the amazing, lifelike illustrations. For $17.99 I feel this book is very well priced and I would most definitely recommend this book to my friends and family. Very good value for money, this is a book that would suit from age's 2 till 7. It's a book that I could easily read over and over again. I like the cover of this book - and so did the twins. They immediately identified with the children on the cover, pointing to each in turn and saying which was which. Teina, the younger of the two girls, announced that she was Emma while Tuakana assured us that she was Pierre. The fact that Pierre was the brother did not faze her in the slightest: at their age, the difference between girls and boys is not in the equation. They are equally happy playing with their traditional "boys' toys" as they are with their dolls' house and dress-up shoes. It is the adults that have the problem, never the kids!

We spent some time on the cover as they were also taken with the parrot and the rodent. They were unsure as to whether it was a mouse or a rat; in the end they agreed it was a rat. At least one of these creatures appears on every page along with the children, and sometimes there are two parrots and two rats, so it was decided by Tuakana that they must be the children's pets. They have a cat so they know all about pets and that strengthened their identification with Emma and Pierre.

I love the message that the book conveys - that it is always best to give a present that you have made yourself at little or no cost rather than something flashy and expensive that the recipient may or may not need or even want. Every parent knows the value of those first drawings or craft attempts that little fingers have worked on with love - and it never matters how imperfect they are, they are received with delight. The girls love working with colours and their creations adorn the fridge door, pictures of crooked suns and stick figures which have been displayed with parental pride!

This book has now inspired them to do some pebble painting so their artwork can adorn the garden as well. Teina decided that if her mother was a queen then her father might be a king (when it came to grownups, the gender distinction was clear) so he deserved some decorated stones for his own garden. When they left me to return home, their parents had strict instructions to stop at a stone paint shop on the way to get the materials they would need. They also plan to take their creations to show the other children at their play group!

Ella is excited to be going on her favourite TV show. Can Olivia help her become a spelling superstar?