ProdID: 1569 - The Tide Lords #2 - The Gods Of Amyrantha
Written by Jennifer Fallon 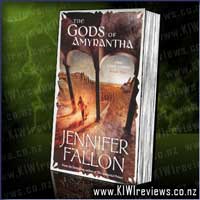 The Tide Lords #2 - The Gods Of Amyrantha product reviews

Things are not going so smoothly for Declan Hawkes, the King's Spymaster, either, and not just because the Empress of the Five Realms has turned up in Caelum with her family. Jaxyn Aranville is determined to quash any opposition to his plans for the Glaeban throne and Arkady's husband, the Duke of Lebec, is in his way.

And in the stark deserts of Torlenia, a meeting between two powerful Tide Lords could put to rest eight thousand years of enmity - or not -

In The Immortal Prince the stage was set, the characters introduced, and the games, along with the return of the Tide, had begun. Now the plot thickens as more Tide Lords begin to appear, usually in roles close to those in positions of Power, and they start to make small moves in preparation for when the Tide peaks. The humans, those aware that the Immortals are more than just names and pictures on the Tarot cards, begin to make moves of their own as they realise the Tide Lords are moving quicker than expected, placing their own people in danger in the attempt to be more prepared.
Along with this, they're still trying to find a way, as they have done for the last several thousands of years, to bring about the end of all the Immortals, but it seems the Tide Lords may have just beaten them to it. The race for several thrones picks up speed, humans and Tide Lords start to form alliances, and shocking family ties are revealed in this second book of The Tide Lords trilogy, where Jennifer Fallon once again works her magic. I have yet to come across a single book of hers that I haven't been thoroughly hooked into half way through the first chapter, and found extremely difficult to put down til the very last page. The Gods of Amyrantha is no exception!!! I am certainly hoping that Fallon is typing fast, as I am seriously itching for the next, and last, in the trilogy. It's leading up to be a hell of a finish to one of the best series I've read in a long LONG time!!!

Little lamb, little lamb, Let me come in!
No! Not by the wool on my skinny-skin-skin!

Kiwi kids will love this home-grown version of The Three Little Pigs, where a giant weasel is substituted for the big bad wolf, and the houses are made from ferns, paua shells and hangi stones!