Scary Stories To Tell In The Dark review 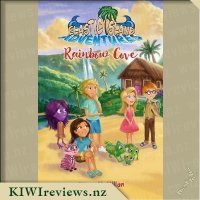 Disclosure StatementFULL DISCLOSURE: A number of units of this product have, at some time, been supplied to KIWIreviews by Duckling Publishing or their agents for the purposes of unbiased, independent reviews. No fee was accepted by KIWIreviews or the reviewers themselves - these are genuine, unpaid consumer reviews.
Available:
November 2019

Just like the first two books in this series, Elastic Island Adventures: Rainbow Cove is set in the South Pacific. Kiri, Jed, and twins Emma and Ethan discover an "elastic" island that sends them pinging across the ocean to a variety of destinations. When they visit Rainbow Cove on Roy-g-biv Island, they meet the frivals who are responsible for maintaining the colours of the island. But the frivals are on strike because the local people didn't like them changing all the colours around - and now, the island is slowly fading to grey. Because of this, the chameleons are dying, so the children set out to find the frivals' missing leader in the hope of saving them. But will they succeed before it is too late?

This is Book 3 of the Elastic Island fantasy action adventure series. It is suitable for readers aged 7-12.

Miss Eight and I are hooked on the books in this series. Not only did she insist on dropping everything to read this one (the third in the series), she also wore her new Elastic Island t-shirt while we were enjoying the story. We read it over four days (in instalments); nobody was allowed to wash the t-shirt until we had reached the very last page! Having the same main characters in a book is a drawcard for children as they start to become almost like old friends, with individual quirks that are instantly recognisable.

As with the previous Elastic Island stories, this one features an innovative plot line. What both of us find really draws us in is the imaginative situations and the novel ways in which the children deal with challenges. Many children's stories are rehashing of older tales and as such can be predictable (and therefore guaranteed to make an avid reader quickly lose interest). McMillan has the knack of being able to present fresh perspectives on basically familiar concepts so that reader interest is sustained. At the same time, fantasy and reality combine seamlessly so that the old ideas of sibling rivalry and real places (like Browns Bay) make the reader feel grounded. As a child with an older brother, and also someone who has visited Browns Bay regularly, Miss Eight really felt that she was part of the greater story.

There were little learning opportunities scattered throughout as well. Miss Eight quickly decoded the island name (Roy-G-Biv) as being an acronym for the seven colours of the rainbow. She loves doing all kinds of art so was very excited at the idea of the frivals having an entire shed full of paint supplies - her idea of heaven! She wondered if the island might really exist somewhere in the Pacific - and if so, maybe we could take a trip there at some stage. The idea of meeting the Belly Monster and Florence was also most attractive now that Belly was friendly, and maybe they would even like to do some painting with Miss Eight.

We both enjoyed meeting some of the characters from the first two books in the series - Big Wig and Wee Wig - and finding that the children (and Blong, of course) had been invited to the wedding of King Shiny and Topaz. However, for anyone who had not first read the earlier books, these characters would not have fitted comfortably with the rest of the story. It seemed to both of us that there should have been a little more background supplied for anyone reading Rainbow Cove as a standalone. A minor point, but one that both Miss Eight and I agreed on.

Finally, we loved the inclusion of the Elastic Island Specification Sheet. Miss Eight's older brother thought this was amazing - he is well and truly into physics and had great fun deconstructing the specs. He especially liked the idea that the colour scheme was included - he said it reminded him of the instructions for a model fort he once made, and which included model trees and sandpaper "courtyards". Although he was not interested in reading the book himself, we did notice him hovering in the background within earshot whenever we were reading. This may have been coincidence, but then again...

And now we cannot wait to read the fourth book in the series and find out what happens in Alphabet Resort. Hopefully it will be available soon so we can enjoy yet another shared reading experience.

Score: 9.1
Product reviews for listing 3618: The Wheels on the Bus -  Author: Donovan Bixley

"The wheels on the bus go round and round ..." Everyone knows the song. But now the bus is going around beautiful New Zealand and its passengers you just might know: kiwi, penguin, tuatara, fantail and many more. Come along for the ride!