« Lily the Littlest Angel 2: Lily Has a Secret review 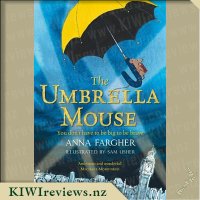 An incredible journey of bravery and friendship about one mouse's fight to survive World War II.


1940. London is under attack. Young mouse, Pip Hanway's safe and quiet world is turned upside down when her home, James Smith & Sons umbrella shop, is destroyed by a bomb. Orphaned and alone, she must begin a perilous quest to find a new home.


But the only way to get there is by joining Noah's Ark, a secret gang of animals fighting the resistance in France, operating beneath the feet of the human soldiers. Danger is everywhere and as the enemy closes in, Pip must risk everything to save her new friends.


The Umbrella Mouse is a heart-stopping adventure that draws on the true stories of animals caught in the conflict of WWII. Beautifully illustrated by Sam Usher, Anna Fargher's debut novel is a timeless tale of courage, resistance and friendship.

I'm no stranger to anthropomorphic creatures in books but I hadn't, until now, read one that was set during any of the human conflicts of war. The Umbrella Mouse takes place in 1944 and follows a young mouse, Pip who's connection to war had just been the people who visited the umbrella shop she and her parents live in. Like so many, she is thrust into the reality of war when the bombs hit, destroying her life as she knew it. Pip is essentially a child, of course being a mouse means we can't put human years on her, but she has that innocence which makes her feel really young but some major gumption, so there is a big personality shift where she grows up rather quickly but given the circumstances that doesn't feel out of place, war makes you grow up fast.

Just as with the humans, the animal realm here has those fighting for and against Hitler and his regime. The book does a good job on touching on the horrors that the war brought it it, such as "There ain't a food ration for pets, so they started to do away with us", an aspect of the war that I had never even thought about. From secret groups, to undercover missions, land mines, traitors, torture and death, this book doesn't shy away from the realities of what was but it isn't done to scare you off or glorify it, it is ismply presenting it as reality.

This was well written, everything flowed well, you hope for a happy ending for the characters and when Pip was sad, I could feel it, when they were scared and afraid I was busy hoping they'd make it out safe and sound as the author had already proven that no one was safe. Once you've finished Pip's tale, there is a couple of pages telling us of the real life aspect to the story as well as the people and animals she drew inspiration from. I don't usually read books based during the wars but this is a book I would be happy to recommend.

What she uncovers sends shock waves through the corridors of power. The NSA is being held hostage - not by guns or bombs, but by a code so complex that if released would cripple U.S. intelligence.