ProdID: 1784 - The Tide Lords #3 - The Palace Of Impossible Dreams
Written by Jennifer Fallon 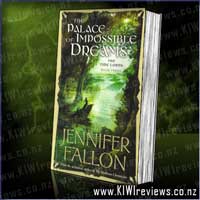 The Tide Lords #3 - The Palace Of Impossible Dreams product reviews

'Just remember, eternity is a long time to be watching over your shoulder...'

Branded and sold into slavery in Senestra, Arkady holds out little hope of being rescued. She turns to her new owner for help... but learning the truth about him may cost them their lives.

Jaxyn's plans hit a snag when he realises the one man who can challenge him for the Glaeban throne, Stellan Desean, has sought asylum in neighbouring Caelum. Strangely enough, the Empress of the Five Realms, and the Tide Lords, Tryan and Elyssa, seem to be on Stellan's side...

And Declan Hawkes, struggling to come to terms with his shocking transformation, abandons the Cabal, and flees Glaeba in search of some trace of Arkady.

*sighs* and another fantastic Jennifer Fallon book comes to an end! Yet again, this author has written a book that had me hooked from page 1, until I reluctantly had to close it having reached the final page. Fast paced, enthralling, and even quite amusing in places, The Palace of Impossible Dreams is a great read that definitely needs to be read in its place in the sequence, as it would just leave far too many questions if read out of order or on it's own.
More and more pieces are coming together, slowly picking up the pace as questions get answered, relationships are revealed, and players are given new roles.
There's the two kingdoms, Glaeba and Caelum, rapidly heading towards war becuase of the petty squabbles between Jaxyn, Tryan, Diala, and Elyssa... reminding me very much of the entertaining bickering that happens at kindergarten. Just how old are these Immortals again??
Then there's Declan, suddenly finding himself one of those he has disliked and sort to put an end to his entire life, leaving him wondering whether he needs to change his views on a few things as he learns the thrills of real power.
Lukys' latest "game" slowly brings several Immortals, that normally try and avoid each other as much as possible, all coming together in the icy realm of Jelidia, where hopefully the answer to whether a Tide Lord CAN be killed or not, will finally be revealed, with Cayal playing the very willing Guinea Pig.
Poor Arkady, no longer a grand duchess but now nothing more than a lowly slave, has suddenly become the obsession of many... both mortal and Immortal.
And Tiji, now finally able to learn about others of her kind, has a few uncomfortable situations of her own to deal with.
There is a lot happening in this book, but not so much that you get lost. Fallon makes it easy to keep up with who's who, who's where, and what's happening, unlike some authors who's greatest delight seems to come from getting their readers as lost as possible throughout the book. Another bonus with Fallon's Tide Lord series, is that unlike many series I've read, (where you get to book 3, and it's already starting to drag, leaving you hoping that the end of the book is the conlusion of the series), book #3 leaves you knowing there's at least one more book coming, but rather hoping there's maybe more after that. Certainly nowhere near getting tedious yet!! Keep 'em coming please!!

In 1814, redcoats burned the White House to the ground. In 1889 Harry Houdini discovered a trick that would save his life. In 1955, the U.S launched the worlds first nuclear submarine. And one family pulled the strings behind the scenes at each of these events: the Cahills - the most powerful family the world has ever known.

Now the Cahills have opened their vault, and dangerous secrets are pouring out. This book contains three of ... more...