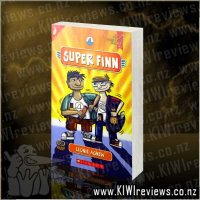 When Mr Patel asks his class what they'd like to be when they grow up, Finn (most famous for getting into trouble and doing stupid things) chooses 'superhero'.

Finn knows what he needs: superpowers, an enemy, a hideout, an outfit and... oh yeah, to save someone's life. Impossible? Not with a sidekick like the amazing Brain.

Super Finn is an active, child-friendly chapter book that is about a young boy named Finn Marsh who is notorious for getting in trouble in school, and when he is told to do a project on what he wants to be when he grows up, he chooses "Superhero" as his topic.

I thought the cover was good, I especially liked the way the title was done. The preview on the back cover was cool, it gave me an urge to open the book and start reading, which is good for when copies of "Super Finn" go on the shelves. The storyline was great, I soon got stuck in to it and couldn't stop reading.

My favourite character would be Finn and his friend Brain, however, since Finn is a troublemaker, I wouldn't say I would want him as a friend because that could cause some problems. The storyline was so well written that it seemed like this thing actually happened, so I'm giving the author, Leonie Agnew, a big thumbs up for that, and the first-person view made it even more interesting.

The book started off well, and it got better as I continued reading it. I might read it again sometime. I think that "Super Finn" is suitable for people 7 years and over since the story contains no violence and is very kid-friendly. "Super Finn" is a story worth reading, so get your copy today.

It began as a sudden strange fancy . . . Polly Perks had to become a boy in a hurry. Cutting off her hair and wearing trousers was easy. Learning to fart and belch in public and walk like an ape took more time.

And now she's enlisted in the army, and searching for her lost brother. But there's a war on. There's always a war on and Polly and her fellow recruits are suddenly in the thick of it, without any training, and the enemy is ... more...