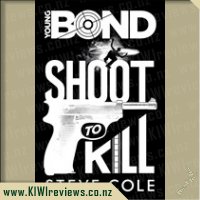 Disclosure StatementFULL DISCLOSURE: A number of units of this product have, at some time, been supplied to KIWIreviews by Penguin Random House or their agents for the purposes of unbiased, independent reviews. No fee was accepted by KIWIreviews or the reviewers themselves - these are genuine, unpaid consumer reviews.
Available:
November 2014

His friends in danger, his life on the line, James must find a way out.

I have loved James Bond movies for such a long time and I have always look forward to a new one coming out. I can't say that I have ever read any of the books though. When I saw that there was a Young Bond book up for review, I thought that it could be of great interest to me too. The front cover certainly gave me the sense of the Bond that I am so familiar with. I love the classy black and silver combination. The raised, silver font and images on the front enhance the look as well.

I sat down to read Shoot to Kill with rather high expectations and I was certain that they would be met. It took me a few sittings to really get into the first chapter as it was a bit different to what I was expecting. I am a very busy mum and I don't get enough time to myself to become engrossed in a novel, so it really needs to grab my attention pretty quickly. The introductory chapter was rather violent and involved the filming of a murder. This chapter becomes a very important reference point throughout the book. Although this book seems written for young adults, I thought that the initial chapter was a bit too violent.

Once I made the time to get through the initial chapter, I started to feel the familiar James Bond nature of the storyline coming through. It seemed like the action was in short chunks throughout the book rather than constant (I was expecting a bit more serious action through the entire book).

Shoot To Kill is just under 300 pages. I actually think that a significant number of pages could be chopped out as it seemed to drag on quite a bit between the initial chapters and when the action really started. Although, it was all important to lead up to the action, I think it could have been edited down a lot. When the real serious action started (about two thirds of the way through the book), it really started! This is when I was totally hooked and didn't want to put the book down. I wish I had felt that edge of the seat feeling throughout the book.

I would think that this book would be suited to young adults who are a minimum of 16 years of age because of the level of violence; however, I think that the writing style is actually designed to include younger teens as well.

The Young James Bond series give the chance for us to find out a little about how James Bond came to become the fabulous secret agent that we know and love. Shoot to Kill shows us how some of Bond's traits developed during his teenage life. I don't wish to let too much of the storyline out in this review as I think that it would ruin it for the reader.

Shoot to Kill is the sixth book in the Young Bond series. I would be interested to read the previous five books. Steve Cole is the author of this book, whereas the previous ones were written by Charlie Higson. Now that I have read the entire book, I would be happy to recommend it, however, it would have been easy for me to give up during the low action parts and therefore not experience the full value that the book had to offer.

Score: 9.5
Product reviews for listing 5383: Piece of my heart
Written by Peter Robinson

As volunteers clean up after a huge outdoor rock concert in Yorkshire in 1969, they discover the body of a young woman wrapped in a sleeping bag. She has been brutally murdered. The detective assigned to the case, Stanley Chadwick, is a hard-headed, strait-laced veteran of the Second World War. He could not have less in common with - or less regard for - young, disrespectful, long-haired hippies, smoking marijuana and listening to the pulsing ... more...