« A Fish in the Swim of the World. review

The Last House in the Galaxy review 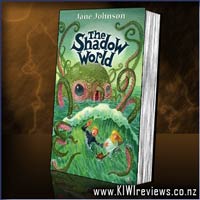 Disclosure StatementFULL DISCLOSURE: A number of units of this product have, at some time, been supplied to KIWIreviews by HarperCollins or their agents for the purposes of unbiased, independent reviews. No fee was accepted by KIWIreviews or the reviewers themselves - these are genuine, unpaid consumer reviews.
Available:
June 2006

The Dodman has begun his reign of terror in Eidolon. Amassing an army of trolls and giants, ghost-dogs and goblins, he is determined to lay waste to the magical Secret Country - and destroy its Queen forever.

Now Isadora must return to her world, leaving her family behind, and lead her people against the evil Dodman. Horrified at being left behind, Ellie follows her mother to Eidolon - and walks straight into danger. Captured and held hostage by the Dodman, only Ben and Iggy can save her and protect the Secret Country from becoming enslaved once more...

What a ripping tale this is. I know my daughter will be in bed, on time every night just to find out what happens next...

This is the second book in the shadow world series, and having not had the pleasure of the first instalment, I look forward, with relish, to reading the third novel in the series (Due late 2006), in the meantine, I should get hold of the first.

Johnson's imagination knows no bounds, turning everyday objects and animals into just wonderful fantastical creatures, with a life and a will of their own. Cats become sphinx's or explorers and messengers - enchanting.
The Story is easy to read and yet compulsively addictive, making one want to finish the book in one sitting (I did it in two because work seems to get in the way of a good book), her imagination is unparalleled and narrative is supurb.

An excellent fantasy book for the younger reader, yet adults will derive enormous pleasure from this novel too. Definitely a name to watch out for - but be aware, Johnson writes under three different names.

We can't tell you who we are. Or where we live. It's too risky, and we've got to be careful. But everyone is in danger. Yeah, even you.

If someone told you Earth was under a secret invasion, what would you think? Rachel had a hard time believing it, even after she and her friends saw what they saw - and received an incredible power to become any animal they touch.

Rachel knew they were in danger from the start, so ... more...