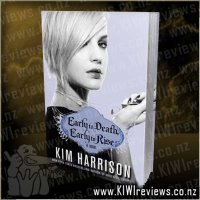 Disclosure StatementFULL DISCLOSURE: A number of units of this product have, at some time, been supplied to KIWIreviews by HarperCollins or their agents for the purposes of unbiased, independent reviews. No fee was accepted by KIWIreviews or the reviewers themselves - these are genuine, unpaid consumer reviews.
Available:
June 2010

Seventeen, dead, and now in charge of heaven's dark angels - all itching to kill someone.

Madison Avery's dreams of ever fitting in at her new school died when she did. Especially since she was able to maintain the illusion of a body, deal with a pesky guardian angel, and oh yeah, bring the reaper who killed her to his own untimely end. Not exactly 'in-crowd' material. It's amazing that her crush, Josh, doesn't think she's totally nuts.

Now Madison has learned that she's the new Dark Timekeeper, in charge of the angels who follow the murky guidelines of fate and kill those souls who are destined to become corrupted - saving the soul at the cost of the life. Never one to abide by the rules, she decides it's time for a major change to the system. With the help of some unlikely allies, Madison forms a rogue group of reapers who definitely don't adhere to the dictates of heaven.

But as she grapples with the terrifying new skills that come with being a timekeeper, Madison realises she may not be prepared for what lies ahead - unless she gets some seriously divine intervention.

Fission Impossible : Round Two of the Galaxy Game

As the sequel to "Once Dead, Twice Shy" I was curious to see how the plot would be carried forward... and boy, I was not disappointed.

Keeping in mind that this is TEEN fiction, aimed at a market far younger than me, I had to take into account how 'soft' it was, and how little real gripping action was there. This was actually quite OK, as the concepts behind the story were captivating enough. Explained just enough to give context, but not enough to really uncover it all... which of course kept me reading and hoping for more crumbs.

A few little hints got snuck in, regarding the location of Madison's body - hidden in a manner only a timekeeper could pull off - but still she doesn't see them... meaning book three holds promise that Madison will be up for a very tough decision about her future career prospects.

With some interesting twists, plus the introduction of a new - and very significant - character destined to play a growing part in the overall plot, this story was quite a good read, even if it did only last me a single afternoon. (Trust me, after taking 5 days to plow through a 726-page trade paperback, this 228-page standard format book was 'light reading'

Overall, an excellent continuation that in no way suffered from 'sequelitis' in the manner of some other sagas I have come across. If you liked the first book, you'll enjoy this one just as much too.