ProdID: 2618 - Jim Springman and the Realm of Glory
Written by: Joshua Wright 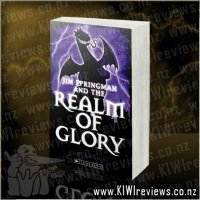 Disclosure StatementFULL DISCLOSURE: A number of units of this product have, at some time, been supplied to KIWIreviews by Scholastic (NZ) or their agents for the purposes of unbiased, independent reviews. No fee was accepted by KIWIreviews or the reviewers themselves - these are genuine, unpaid consumer reviews.
Available:
June 2010

Jim Springman and the Realm of Glory product reviews

Jim's birthday is turning into a total disaster. His present is a bus pass, two annoying girls have moved in next door, and his mad-scientist brother has just accidentally altered reality as we know it by unleashing the Fifth Dimension.

Suddenly there are goblins riding the bus and a huge dragon terrorising the town. In fact, the town of Queen's Port is starting to resemble the bestselling fantasy novel The Realm of Glory - Jim's least-favourite book.

And guess who's expected to fix it all?

In this story a young boy's 12th birthday is turning into a complete disaster. Two annoying girls have moved in next door, his birthday presents are a copy of his least favourite book written by his eccentric sister, and his scientist brother has unleashed the 5th dimension. This is the second-longest book I've read, yet I found it incredibly difficult to stop reading it until I had finished! It was so mind blowing and intense, and it is definitely one that I want to read again. However, I was a bit worried in some parts like when Jim was in a heap of trouble near the end, but it just added to the enjoyment of the book.
One of the characters, Ingrid, was a bit annoying as the only thing she thought about was money, and she spent it like there was no tomorrow. As for her brother Fletcher, he was a bit like his sister, except he only thought about his experiments, plus I found him to be quite conceited and arrogant. I thought that Jim was a brave and interesting character, except for the fact that he was a little self-conscious when it came to girls, but other than that I was quite fond of him.
I think that 10 years and over is a good age group for the Realm of Glory as it was so cool that I think almost anyone will love it. I thought that the storyline was so well written that I could almost see it in my head as if it were a movie in my head, so the author, Joshua Wright, has made a wonderful book. Jim Springman and the Realm of Glory is an awesome novel, so I hope that you'll enjoy it too.