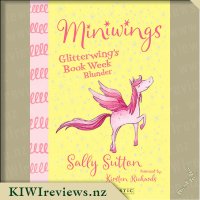 Disclosure StatementFULL DISCLOSURE: A number of units of this product have, at some time, been supplied to KIWIreviews by Scholastic (NZ) or their agents for the purposes of unbiased, independent reviews. No fee was accepted by KIWIreviews or the reviewers themselves - these are genuine, unpaid consumer reviews.
Available:
June 2017

Sssh ... NOT for parents! You can keep a SECRET, right?

Clara and I have a herd of tiny, talking, glitter-twinkly, flying horses - and they're REAL! It's true.

Those naughty Miniwings get us into so much TROUBLE! Who would have thought Book Week could end up such a magical MESS!

With illustrations by Kirsten Richards

When I saw that there was Miniwings 'Glitterwing's Book Week Blunder' available to review I requested the book and crossed my fingers. My five year old daughter had just had a Scholastic Book Fair at her school and had been asking if she could buy the book, unfortunately funds were a bit stretched that week. My daughter was with me while I opened our review box and to say she was delighted when she saw the book would be an understatement. I think over the moon would more adequately describe it. In our household every night before bed we read either 3 short picture books or one longer book, needless to say my daughter was very quick to get ready for bed this night.

After getting comfortable on her bed we looked at the cover page. We liked the contrast between the yellow background and all the different shades of pink, but the part that really caught our attention was the shimmering stars. The series is based on 'a herd of tiny, talking, glitter-twinkly, flying horses' these horses are called the Miniwings and there are six of them in total. The story starts of with a Top Secret page which is supposed to be an Adult-Free Zone,my daughter was amused by this but allowed me to read to her as she said "it would take ages for me to read alone." Once we turned the page we came to the page which became my daughter's favourite. This page had vibrant, colourful pictures of the six Miniwings and gave a brief description of them. Firestorm is my daughters favourite and mine is Oceana.

The story-line is based around two girls and the Book Week that is happening at their school. The Book Week includes a special visit from the girls favourite author and also a costume contest. There is a lot of drama involved in the girls creation of their costume, especially when the Miniwings decide to be mischievous and cause lots of trouble!

Overall we both thoroughly enjoyed reading the book. The fantastic illustrations throughout the book combined with an exciting, adventurous story-line kept us intrigued right till the end. This book has already been read numerous times since we received it, and currently has pride of place on the top shelf of the bookcase. My daughter is now eagerly awaiting her chance to read the next book in the series - 'Whizz's Internet Oopsie.'

Miniwings 'Glitterwings Book Week Blunder' is about a herd of naughty, tiny, talking, glitter-twinkly flying horses that create havoc for two sisters, Sophia and Clara who want to win first prize for their school Book Parade. The cover is very colourful and attractive and when my 9 year old daughter saw it, her eyes lit up and she disappeared into her room. 30 minutes later she reappeared and said it was really, really funny. I had intended giving this to my 6 (nearly 7) year old daughter to read but was glad it had first gotten the thumbs up from my eldest!

So, in the interest of a good review, I decided to sit down and read this book myself! The first pages give you an introduction into what the Miniwings are... sorry, it's TOP SECRET and not for adults! The following pages introduce you to the Miniwings and give you a brief description and picture of each one. Aimed predominately for girls, this book describes the adventures and disasters Sophia and Clara face trying to make an outfit for the Book Parade. It finishes off with a nice little moral about what's on the inside being the most important. I have to say, for emerging readers and introductory chapter readers, this book is fabulous. The Chapters are relatively short, there is a good amount of space between sentences which make it easy to read and the fonts change to emphasize certain words. There are also lots of colourful and amusing illustrations which compliment the story and make it more interesting for the younger reader.

I gave this to my youngest daughter to read and although not a lover of books like my eldest, she did sit down and read it in a few sittings. She would come up and tell me about funny things that happened and show me the amusing pictures. I think this book is a great read for emerging readers and I will definitely be on the lookout for more books in the series.

For the past five hundred years, the Cahills have silently dominated the world. Their desperate hunt for the 39 Clues lies behind some of history's biggest enigmas - the curse of the Hope diamond, the race to summit Mt. Everest, the wild life and death of Harry Houdini. And now - finally - the secrets are out. With an introduction by Rick Riordan, "The 39 Clues: The Black Book of Buried Secrets" reveals the shocking truth about history's most ... more...