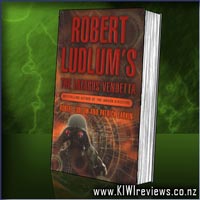 In the increasingly turbulent atmosphere of international politics, the once grassroots anti-globalisation movement has been slowly taken over by an underground radical anti-technology group fronted by the mysterious figure known only as Lazarus. All attempts to infiltrate the group have failed, the intelligence agents involved have all disappeared without a trace. Now U.S. Intelligence believes that Lazarus is preparing to make his boldest move yet.

Lt. Col. Jon Smith is activated by Covert-One to bring his skills to bear in uncovering the truth behind the terrorists. Smith must find and uncover the truth where all others have failed - but the Lazarus Movement is linked to a deadly scheme that will risk the lives of billions, and forever change the world.

Can Jon Smith succeed in time, or will humanity pay the ultimate price?

An eco-consciousness and anti-globalization group, devolved into an anti-technology group gone underground, the Lazarus Movement shows signs of modifying its scope of activity to strike a bold blow against nano-technology as applied to bio-weaponry. When their first overt action kills staff within and protesters surrounding a nano-research facility, by releasing a cloud of invisible nanobots, Covert One (a top-level "need-to-know" security group working only for the US President directly) calls on Lt Col. Jon Smith to uncover the reality behind the Lazarus Movement and its leader Lazarus.

The story is fairly fast-paced, the action scenes tightly written, the explanations of the nano weaponry and its efficacy are clear for even this non-physics one to grasp. The gore of the nanobots' work within a victim's body are chilling - easier to read though than it would be to see portrayed on a big screen.

Jon Smith continues his work, losing colleagues and friends on the way, relying on Covert One to provide relief, backup and weaponry he can use. Duplicity and treachery among the usual stalwarts of security work to keep the Lazarus Movement beyond Smith's reach.

The revelation of the stereotypical delusional, vengeful megalomaniac Lazarus is almost no surprise. The use of traditional military combat techniques to bring the Lazarus Movement to a dead stop is only a small point at which the reader suspends disbelief.

Not usually a fan of the thriller/drama novel as a genre, I was led to it by familiarity with the Bourne trilogy of movies. Ludlum's Lazarus Vendetta was no disappointment, having me hooked into late night sessions seeking to complete it "a.s.a.p." Definitely one to pack into a mailer and send to friends.

With today's scientific minds bending their strengths to a number of 'super-science' technologies such as nanotechnology and biogenics, this story is enough to give any serious science-watcher the screaming willies... and if it doesn't, there's something wrong with the wiring in their brains, because let's face it... a swarming army of machines as small as a knotted protein flowing through our bloodstreams and dissolving us at a cellular level is pretty darned terrifying really.

Ludlum has created a world of maniac powermongers hell-bent on total domination of humanity... and with the able assistance of Patrick Larkin, has crafted another tale of Jon Smith, modest and low-key saviour of the world. The right man, in the right place, at the right time can change the course of history... so you can imagine how Jon feels, being the right man in the bad places at the wrong time... poor bugger.

I was particularly taken with the concept behind the destructive nanophages (microscopic nano machine swarms).. using a 'co-operative' control methodology instead of a 'self-contained' or 'singular unit' methodology raises a number of options, many of which are entirely beneficial. The idea of a swarm of 'do-ers' and a smaller number of more specialised 'sensors' and 'controllers' allows for a much more intelligent approach to nanoprocessing, meaning that all the worker units have no 'brain' other than a set of simple receptors which will trigger pre-defined behaviours, depending on what chemical signal they pick up from the controller units. Imagine a swarm of nanobot that can not only clean up an oil-spill, but process the raw crude into refined petrol in the process, leaving behind nothing more than softball-sized spheres of polymerised carbon chains filled with purified petroleum...

Overall, the story was well constructed, the characters detailed and whole, and the action was astounding, if perhaps a little TOO detailed in places. If you enjoy a good spy novel, then you really should start investigating Ludlum's 'Covert-One' books, if you haven't done so already. This is another winner in that family of titles.