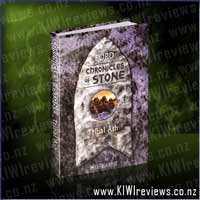 IN AN ANCIENT TIME, THE DIFFERENCE BETWEEN LIFE AND DEATH IS KNOWING WHEN TO RUN, AND WHEN TO STRIKE BACK.

Trei is determined to return to the Canyons with the secret of the Northmen's power but the Mountain Tribes would take him prisoner rather than keep the bargain promised to his sister Souk.

He carried nothing. He had no weapons, but all that he needed was in his head, and he was free. He knew that they would chase him, would try to hunt him down, but he wouldn't give them back his freedom.

While Trei struggles to return home, Souk endeavours to forge peace between the Northmen and those who call them 'Manhunters'.

The book started off really boring, but in the end it turned out AWESOME! What I enjoyed most was when Trei and Souk have children and meet again with the people of the canyons. I didn't like all the killing in the book because it sounded so gross that I felt like I was about to barf. This book was almost like Set In Stone, except it looks longer but has less chapters in it. This book is so descriptive that you can almost imagine yourself looking at the scene in front of you. The book ended like there was still more to come, but it WAS the end of the Chronicles of Stone trilogy. I may not like it THAT much, but I hope you do.

Dreamland is a cutting-edge weapons research facility in the Nevada desert - home to some of the world's finest pilots and an elite combat unit that operates directly at the command of the US President.

The Dreamland team fly to the South China Sea amid growing tensions between India and China. A Chinese freighter has been sunk by an unknown submarine-launched missile. Using Piranha, an experimental underwater probe, they begin ... more...