There Was an Old Lady Who Swallowed a Star review 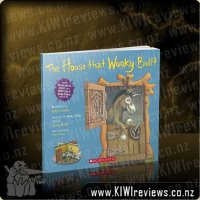 Includes : Fold out play set, stickers, plus a bonus copy of The Wonky Donkey book and CD!

Not suitable for children under three years. Contains small parts.

My kids and I are great fans of The Wonky Donkey so when I saw there was a house for him i had to get it. I but my name forward to review it and entered every competition I could find but no luck. As it was getting close to Christmas I suggested that my lovely mother buy it for my daughters (4.5 and nearly 3). She did and my girls were so happy to get it that my youngest started singing the song the moment she saw it.

I hid it away as my girls had so many new things for Christmas and took it on holiday with us last week. We were staying in a motel and I needed a quiet activity that would settle them while their wee cousin slept. This was perfect. The children watched as I punched out and assembled each on the dining table. The moment a piece was finished it was being played with. I was grateful there were two characters, the donkey and the bird, so they could have one each to play with. It was ideal for my eldest daughter but for my youngest she kept knocking things over. The highlight for them was being able to place the stickers where they wanted on Wonky's house. Being repositioning stickers I didn't stress when they put it on the TV or anywhere else in the motel room they shouldn't have.

It was left up overnight and played with the next day. It was easy to put away just by flattening a few of the pieces ready to be pulled out on a rainy day. I don't think it would be durable enough to leave out for my kids to play with regularly but is ideal as a quiet activity to break up the boredom. The fact that the kit also contained the book and CD was a bonus for us. As we already have a copy it was nice to be able to pass this onto my wee nephew.

Thank you so much for picking us to review the house that wonky built. Miss 6 was absolutely delighted to receive it, especially as it was one she had on her list of books she wanted. The house looks like an ordinary book at first glance but this then folds out and because wonky's house has a circular base, the book/cover divides into 4 rooms...and its not a small set either, its actually really big which surprised me. It ties with a ribbon to keep it open in place.

It took us about an hour to set up, there were stickers for decorating the walls of the house and there were cardboard cutouts to make furniture (bed, toilet, sink etc) and even a cardboard wonky too. Some of the tabs were a bit fiddly and required taping to hold them in place and miss 6 did get frustrated with the cardboard washing as she could not get it to stay on the clothesline. However even though it took a while to set up, and i honestly thought once it was the excitement would be gone, she loced every minute of it.

Once set up she played on her own for almost an hour, then she got out her plush wonky donkey toy and coerced her brothers into playing with her too which resulted in a further hour of play and when that game was over she still wasnt ready to finish and played for over an hour with her father and i. So all up the set was in use for over 4 hours (ages being 6, 11, 12 and two adults)...that is really impressive.

I am super super impressed with this set and stoked that it comes with a copy of the book and the cd (i was not aware of that). This is definitely a set that would not only make the perfect gift but would also be well received and well played with too. Its just great.

The girls and I needed a distraction so as soon as Miss One had gone to sleep for her nap out came this Activity Set. Miss Four and Miss Six immediately took charge and set up "The House that Wonky Built". It folded out and then we tied together with the ribbon to form a circular house. The girls busied themselves decorating with the awesome reusable stickers. They created the house decor that they wanted and used some great teamwork.

Whilst the house was being decorated I punched out all the cardboard pieces (to avoid rips...) and helped to put together - as some of the tabs and construction was a bit tricky. I used cellotape to hold a lot of tabs in place (the bed was awkward!). Miss Six read the instructions, as much as she was able, and figured out where certain things should go. The instructions were easy to follow and the punch out pieces were all labelled so very easy to follow.

The little misses then put the furniture etc where they wanted and, as I withdrew myself, they spent several hours playing with the set in a marvellous make believe way. The activity set has been sitting on our dining table (out of Miss One's way) and the girls have been playing with it whenever they can. It really is fantastic.

I don't really know The Wonky Donkey but the girls all know the song and book from Kindy so it was great that this set included the book and CD. What a great book! I love the catchy song and the girls sing the song and take charge of the book singing it to Miss One! The book is smaller than I think the kindy book is, but a good size still to read, and I like that I can just pop it in my handbag so Miss One and Miss Four have been "reading" it when we are out.

Overall this really is fantastic activity pack and came at a perfect time for us. I often have my girls fighting over toys but because this has three "stage" areas they have worked and played together on this and there has been no fighting. Phew!

A brilliant gift for Christmas or for a birthday and great value for the price.

Born into a dark world trapped forever in icy winter, Elsha is a child of the Quelled, a branded people doomed to mine firestones to warm the ruling class, the Chosen. But Elsha has visions and an uncommon strength of spirit. Condemned to death on her 16th birthday for defiance, Elsha is saved when she is called to be Handmaiden to the Firelord - the most powerful being in her world, the only one with the gift of divining firestones. Viewed ... more...