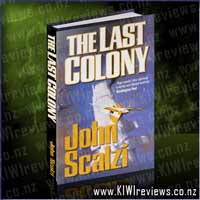 Disclosure StatementFULL DISCLOSURE: A number of units of this product have, at some time, been supplied to KIWIreviews by Macmillan Publishers Ltd or their agents for the purposes of unbiased, independent reviews. No fee was accepted by KIWIreviews or the reviewers themselves - these are genuine, unpaid consumer reviews.
Available:
at quality book outlets

John Perry has at last found peace in a violent universe, living quietly with his wife and daughter in one of humanity's many colonies. It's a good life, yet there is something strangely missing. When John and Jane are asked to lead a new colony world, he jumps at the chance to explore the universe once more.

But Perry soon finds out that nothing is what it seems. He and his new colony are merely pawns in an interstellar game of war and diplomacy between humanity's Colonial Union and a new, seemingly unstoppable alien alliance that has decreed an end to all human colonization.

As this contest rages above, Perry struggles to keep his terrified colonists alive in the face of threats, both alien and familiar, on a planet yet to reveal its own fatal secrets. For their survival, he must now unravel the web of lies and half-truths spun around him - to prevent an all-engulfing war that threatens to make his followers the last colony of the human race.

As the third and final installment in the tale that began with Old Man's War, this is a welcome return to familiar territory. We again follow the two key characters of this series, the now fully-human John Perry, and the humanised ex-Special Forces clone of his dead wife, Kathy, now known as Jane Sagan.

This time the dangers are not only from the violent alien forces arrayed against them, but also from an unexpectedly close direction. They must bring forth all the skills they learnt as the adapted warriors they once were, but now they must find a way that takes into account the greatly limited range available to a standard human form... yet still avoid getting blasted by a 'subtle show of force' from an armada of over 400 alien warships... or worse.

Overall, with witty, sharp dialogue and characters that are both deep and well-rounded with experience, and a plot both solid and unexpected in it's twists, this was a most enjoyable read that left me joyous about a return to a familiar and wonderous universe, yet also saddened by the blurb from the author that made it clear this was to be the last foray here. A total shame, because I loved what it had to offer and would gladly have read a lot more tales set here.

Thomas Ward is the local spook - it's his job to protect the county from things that go bump in the night. But this is no ordinary haunting, and he finds ... more...