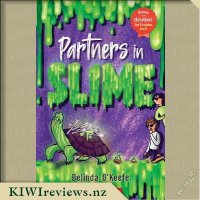 Disclosure StatementFULL DISCLOSURE: A number of units of this product have, at some time, been supplied to KIWIreviews by the company for the purposes of unbiased, independent reviews. No fee was accepted by KIWIreviews or the reviewers themselves - these are genuine, unpaid consumer reviews.
Available:
June 2021

Best mates Jake and Cooper are doing a roaring trade at school, selling tubs of homemade slime and saving their money for a ride on the new roller coaster at Adrenalin World... until Jake's sister begins selling a superior product.

But when the boys (with the help of a scientist uncle) invent a new "magnetic neon gloop" that becomes all the rage, things start to go awry when it begins to grow and morph into who-knows-what. Jake and Cooper have to try to recover all the tubs of gloop before havoc breaks loose. But are they too late? 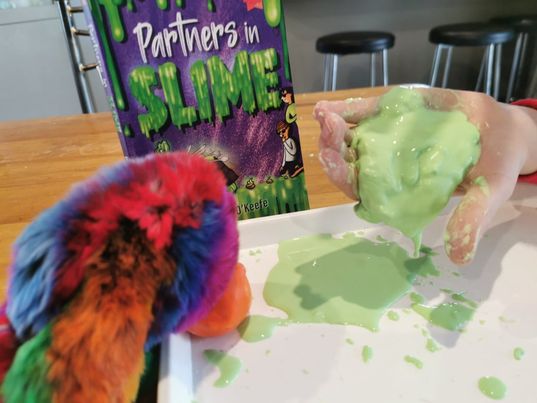 There is something quite compelling about wet, sticky messes whether they be mud pies, plasticine, slime, plaster of Paris, or even a bread mix ready to be kneaded. Little hands love to mix the soft material and laugh when it sticks to the skin. It is also a great weapon for throwing at people who are being annoying! Miss Nine and her friend, Miss Ten, are typical kids who can amuse themselves for hours manipulating these messes and even manage to clean up after themselves. When Miss Nine saw the book title, that was it - she was sold!

We all read the book - I read it first, then Miss Nine took it and passed it on to Miss Ten afterwards. It was useful to have two children help me review as they had quite strong opinions on some of the content. While Miss Nine has an older brother, Miss Ten has two younger sisters, and I found it highly amusing when they began to discuss the Jake-Paige dynamic and compare it to their own situations. Both have had experiences of being unfairly treated by an over-assertive sibling, so could relate to Jake's situation with his frequently poisonous little sister. Miss Nine, a strong feminist who will usually take the side of the girl on principle, said she would have to side with Jake this time - because although he was a boy, it was clear that Paige did not deserve her support! Miss Ten agreed; she said that her own sisters were angels compared to Paige.

Both girls found the text a little demanding in places; it is not dumbed down for a young audience, but the storyline was strong enough to retain their attention so they were able to figure out most of the unfamiliar words in context. I like books that challenge kids to work things out for themselves; they become better readers as a result, and because the process is enjoyable, they do not realise that they are learning too. The story itself is a mixture of ordinary school life - including academic challenges, dealing with class bullies, and fundraising efforts - and the fantasy element which adds a dimension of fun. Combine all this with the intricacies of coping with eccentric family members and keeping the peace at home, and there is more than enough for most kids to relate to.

Miss Nine has been on the roller-coaster and the log flume at Rainbows End in Manukau City, so she was able to imagine the sort of ride the boys were saving to go on. She and Miss Ten have been involved in several fundraising ventures at school over the past two years and that kind of pressure is all too familiar. Of course, this is what makes the story so accessible to readers of their age; they can relate to so many of the situations and issues faced by Jake and his best friend Cooper.

When the girls had both finished the book, they decided to make their own version of slime to see if worked the same way. They raided the kitchen - albeit under parental supervision as Miss Nine's mother knew better than to let them have free rein! - and after several protective sheets had been layered on the table, they got to work. Miss Nine was given a rainbow rabbit for her birthday recently, so she propped him up so he could oversee the action. They were quite proud of their result; it ended up a slightly lighter shade of green than that on the book cover but looked suitably authentic. I tried making something with it but was not very successful - I ended up with more on my clothes than on the table! But then, I am not nine or ten years old, so maybe I just lack the dexterity for the task.

I will admit, that when I first saw this book I had no interest in reading it as I allowed the cover art to put me off, silly me, I'm more than well aware of the old adage 'never judge a book by its cover'. So, today, with little else to do, I grabbed a copy off the shelf in the little bookshop I work in and was able to finish it in one afternoon. Two friends are dying to go to the opening of a new rollercoaster on opening day and decide to make slime to sell at school, which leads to a bit of competition with Jake's awful little sister (and she truly is awful, even I didn't like her) and naturally bad choices are made and things get way, way out of hand.

The story flows along at a really good pace, it built up really well and then held itself steady so I never felt bored or was waiting for everything to pick up again. I liked Cooper and Jake, and enjoyed the oddball character that was Coopers uncle. Some outlandish moments happened but because of the flow and setup it didn't feel out of place at all and was rather entertaining. The book ends with a bit of a twist, which I wasn't expecting, I was expecting an all ends well ending, but the one provided was fun enough that I chuckled out loud. This ended up being more entertaining than I had anticipated and I will happily be recommending it to others.

This book is about putting your design ideas on paper for others to enjoy. Recent developments in computer rendering technology have put amazing new tools in the hands of designers. But for communicating emotion and character, there is simply no replacement for good old-fashioned hand drawing. Jim Leggitt's Drawing Shortcuts gives you an ingeniously ... more...