What Does Santa Do when it's not Christmas review 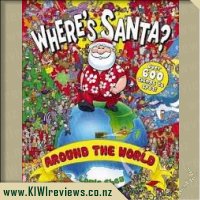 Santa is off on a holiday around the world! But he is being followed by Naughty Nat who is trying to steal his 'naughty and nice' list. Can you find Santa wherever he goes? Or will Naughty Nat manage to track him down first and get her hands on the magic list?

My kids love search and find books. Especially miss 8, she is obsessed with them and has a few in her collection. But until recently she had no Christmas themed ones. She was super excited to see this one in our parcel from KIWIreviews and she couldn't wait to get stuck into it.

This is not like most search and find books that just have a list of things to search for on each page. It has a story line to it and follows Santa around the world, but be careful Santa, you do not want your list to be swiped lol. The book has a large hard cover and lots of bright busy pages. It is not small, fiddly, or boring BUT it is kind of hard lol. There were a few pages we struggled to find things on.

I liked that it was not an easy search and find, and that it did actually require some effort. And as we struggled to find some things it is also one we will need to return to over time :) It is fun and one my whole family enjoyed. My daughter loves it but I think if she was a couple years younger she would have struggled with it alot, and would have just looked at the pictures rather than finding things. Its definitely worth tbe price though.

My son (age 7) loves search and find books - they always keep him occupied for ages while he studies each page intently to find each object.

Where's Santa Around the World sees Santa and Mrs Claus going on a relaxing cruise. They are followed by Naughty Nat who is determined to steal Santa's list so that she can put herself on the nice list.

I really liked the combination of story and searching pages in this book. There are lots of interesting things to see and find on each page. Each double page spread is for a different country or city and provides lots of opportunities for discussion and learning about different countries and cultures.

My son found the book to be quite challenging and even I wasn't able to find everything on each page but it was fun all the same. The illustrations are bold and quirky with lots of fun things to see. There are 12 main things to find on each page and at the back of the book there are lists of extra things to find.

It's a book that we'll definitely keep coming back to as there's always something new to see on each page that we didn't notice the last time and it provides endless hours of fun.