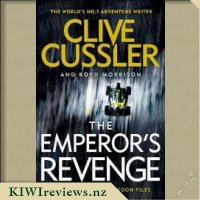 Juan Cabrillo and the crew of the Oregon - the Corporation - face an unprecedented challenge when a violent bank heist during the Monaco Grand Prix decimates their bank accounts. To get their money back, Juan joins forces with an old friend from his days in the CIA to track down a rogue hacker and a ruthless former Ukrainian naval officer.

It is only after the Oregon's hunt begins that the enormity of the treacherous plan comes into focus: the bank theft is just the first step in a plot that will result in the deaths of millions and bring the world's economies to a standstill. The catalyst for the scheme? A stunning document stolen during Napoleon's disastrous invasion of Russia. But two hundred years later, it may be the thing that brings Europe to its knees.

This novel is part of the Oregon Files series.

There is nothing better than making the time to lose yourself in a book that combines fantasy on various levels, throws in a good helping of mainly accurate historical elements, and includes non-stop action that sometimes leaves the reader gasping for breath. This is fiction at its best as long as the reader can suspend disbelief and just go along for the ride.

There are three subplots, each of which intertwines with the others to create a complex story which spans the European continent and various time periods. The first concerns the real Napoleon Bonaparte, albeit in a new adventure which could possibly have happened but probably didn't. No harm: at the end of the day, it does not really matter whether or not you believe it really happened. There is no point in taking it too seriously as this is, after all, a work of fiction with the odd verifiable fact thrown in. Suffice to say that the Emperor of the book title is Napoleon himself.

The second subplot concerns the crew of the Oregon whose captain, Juan Cabrillo, can do almost anything since money never seems to be an issue. He leads an existence worthy of James Bond at his best, solving the world's problems and meeting threats head-on with the help of his highly qualified and super-intelligent crew. I found it hard to believe that so many life-threatening events could happen to one man as he appeared to be invincible, but in the long run who cares? It is an exciting yarn which captivated me from the first page; in fact, I found it hard to put down at the times when I had to return to the real world.

Finally, there is the subplot of the opposition, led by Sergey Golov, and the complex web of deception, betrayal and destruction which characterises his team. Golov's ambition is ruthless in the extreme; he is the embodiment of evil as he clashes not only with the crew of the Oregon but also with his own people, demonstrating a total disregard for human life as he single-mindedly pursues his ultimate goal.

The main plot follows the race to stop Golov's team from carrying out an act of sabotage which will destroy all the major economies in Europe, with repercussions worldwide. This is thriller material at its best, with every possible technology (both current and projected) available to both sides. Even the railgun, an invention which is still being fine-tuned and adjusted, has pride of place in this yarn.

Computers are state-of-the-art and invested with capabilities well beyond the status quo, although it may well be that some of these possibilities will become reality before long. It is certain that technological development is constantly shifting and the experiments of today are the realities of tomorrow. Nothing has changed from the days when da Vinci was hinting at the world of computers to come, and Jules Verne was writing about space travel several centuries later. Their predictions came to be, so why not Cussler's and Morrison's?

One of the most exciting attributes of the book is the way the chases unfold. There is an almost cinematic aspect to the descriptive passages - it is easy to visualise the shifting positions of the protagonists and at a couple of stages I actually found myself urging on Juan's team! It is the sign of a well-crafted yarn that the reader can become immersed in the virtual reality of the story to the extent that the real world is temporarily forgotten.

On balance, I enjoyed this book and am looking forward to reading another in the Oregon Files series. For no other reason than that I like the escapism provided by a good yarn, and the challenges offered in working out which historical and scientific statements are authentic and which are dependant on poetic licence designed to create an intricate and compulsive storyline.

SOMEONE IN THIS CLASS IS A WITCH When the note, written in ordinary ballpoint, turns up in the homework books Mr Crossley is marking, he is very upset. For this is Larwood House, a school for witch-orphans, where witchcraft is utterly forbidden. And yet magic keeps breaking out all over the place - like measles! The last thing they need is a visit from the Divisional Inquisitor. If only Chrestomanci could come and sort out all the trouble.