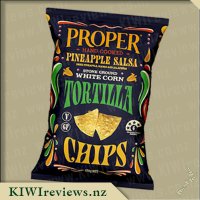 Disclosure StatementFULL DISCLOSURE: A number of units of this product have, at some time, been supplied to KIWIreviews by Proper Crisps or their agents for the purposes of unbiased, independent reviews. No fee was accepted by KIWIreviews or the reviewers themselves - these are genuine, unpaid consumer reviews.
Available:
nationwide

Hola Amigos! Our Tortilla Chips are crafted in the same, traditional way they've been made in Mexico for generations. Did you know the humble Corn Tortilla has been a staple food in North American and Mesoamerican cultures for centuries?

Inspired by Mexican salsa made using fresh, simple ingredients, our Pineapple Salsa Tortilla Chips are packed full of natural flavours - and no added sugar. We've used dried pineapple with a hint of mango & jalapeno peppers for a burst of flavour both spicy and sweet. 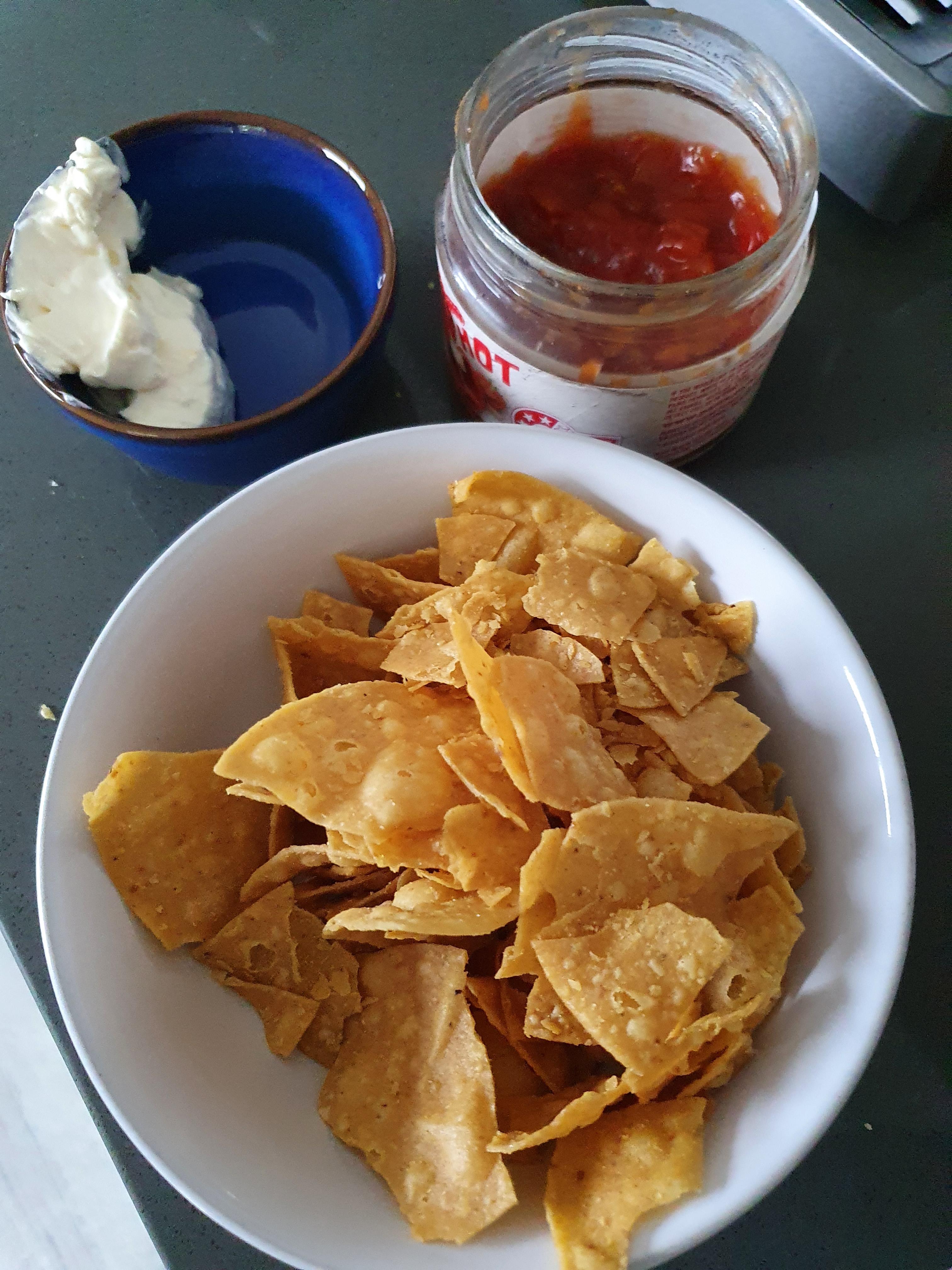 So my first use of these I forgot to take a picture of as I replaced my usual nacho chips with these and it wasn't a massive success for me as it added an unusual element. Once we retried them on their own I became a bit more comfortable (but that is why the chips in the picture are more the bottom of the pack. That said I found them a bit more brittle than I expected and they were a bit broken up. The sharp edges might be an issue for the sensitive to such things.

So the proper range has some lovely products and I usually love them. This however was a product that came from a back foot for me. I generally don't like sweet or fruit in my savoury dishes. I am not a pineapple on pizza kind of girl so that aside it was a good functional product. They did feel well made and the crispness could not be faulted. The pack size was good and although we had quite a few broken chips they had travelled much further than would be usual between the supermarket and home.

Chips are often a very "manufactured" shape and these felt quite natural and different in size shape, angles and felt very homestyle/natural in both look and texture. The colour was a bit off-putting as I like a less white tortilla chip it seems. The bubbles made them seem a bit less healthy for me. This might be personal as the husband was a fan and liked the lightness. The nachos were more affected taste-wise by these chips and I would stick to my usual product but understand that the different look and texture might appeal to others. Probably not a rebuy for me as either an ingredient or a snack. 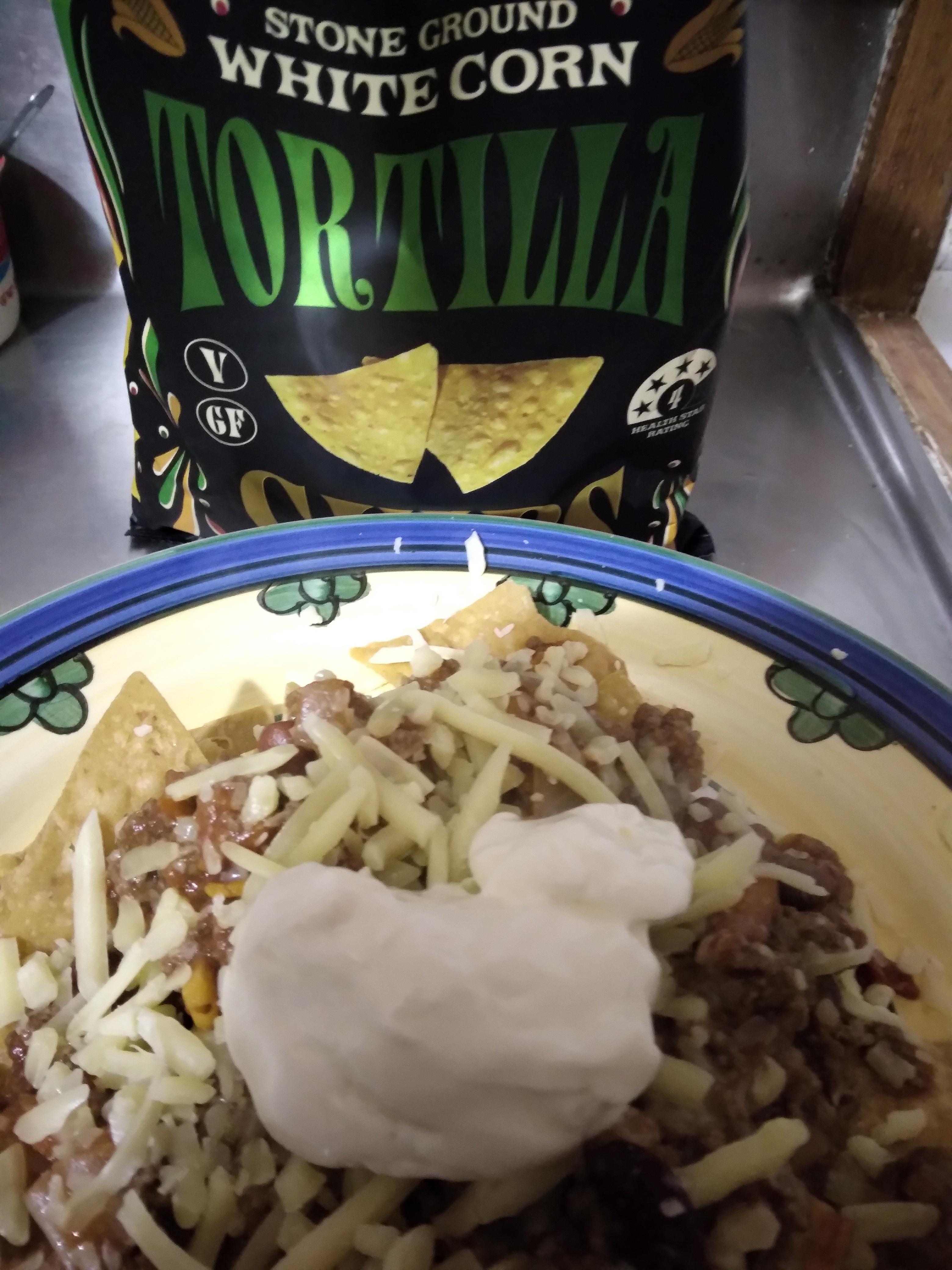 I am under the opinion that Pineapple does belong on pizza, it belongs in burgers and it belongs with pickled onions and cheese - I adore pineapple and I love pineapple salsa so that is why I am beyond shocked that I really did not enjoy these chips at all! When my husband looked at the flavour he was a little surprised and said "this is going to be interesting" and I defended the flavour saying how I would absolutely love it and could not wait to try.

It's been a crazy day and we got home late so I got my husband to prepare the mince, made the usual way with garlic and onion, crushed tomatoes with garlic flavour and mixed beans with corn. I had originally planned to stick it on top of these chips and bake them with grated cheese then top with tomato and avocado and sour cream but honestly, I was zonked - so took the easy way and just placed on the chips and threw the grated cheese on top.

Before plating up I gave my husband, two girls and myself a couple of the Tortilla Chips and waited for everyone's reaction which was very mixed. Everyone agreed the actual chip shape and crispiness was awesome - could not fault it - and in the future, these will be the preferred chips for nachos as they are great. As for the taste - nope - I personally found them just too sweet. You could definitely taste the pineapple but it was not the juicy pineapple I envisaged and instead it was just a wrong taste for me. One of my daughters enjoyed it the other said it was just weird and my husband agreed the chip was great just not the pineapple.

I thought covered with the mince, cheese and sour cream mixture that it would work and even that had its issues. Even now some twenty minutes later I still have a pineapple after taste that just does not work with me. Will we be purchasing again that is a very hard no, but I am hoping there is some other Tortilla flavour out there.

None of us knew what to expect when we saw the fruit and jalapeno combinations in these tortilla chips. It sounds weird to say the least - sweetness in a product normally linked to savoury dishes? We were not sure about that! The first taste took us all by surprise: it was not only delicious, it was stunning. I was sorry I had invited three other people to taste them with me because I could quite easily have eaten the whole packet without any help at all. The pineapple flavour was much stronger than the mango, but the jalapeno packed a hidden kick which meant the sweetness stopped just short of being too intense. As for the crunch factor, it was perfect. The crisps were just the right thickness with a satisfying snap as you bit into them.

Having tried some of the crisps on their own, we went on to test them with two separate meals. The first was a traditional mix of finely ground beef and vegetables with added nacho spice mix, refried beans, fresh tomatoes, sour cream, sliced avocado, and grated cheddar. We stuck to the rules with this one, holding the salt so it would not overwhelm the other flavours. The pineapple certainly shone through, and we realised that pineapple and avocado are an amazing combination, something we would never have thought of trying, so this is a culinary idea to add to our store of recipes. It is something that would contribute an added flavour dimension to any Mexican inspired dish.

The other way we tried it was with raw fish prepared with coconut cream and lemon. This is a dish we often buy at the local markets; a Maori and Pasifika delicacy, it is usually served with rewena bread and is a tasty side dish with other seafood meals. We always add a dash of fresh lime juice as well, which makes the juice even more runny. Ideal for dipping dry bread but not so suitable for eating with crisps. We got over this by taking alternate mouthfuls of fish and tortilla crisps and combining the flavours in our mouths. Both of us loved the mix of crisp tortilla and soft fish; it was incredibly tasty and we could easily have eaten much more if we had planned ahead. However, that is another recipe to try again in the future.

The packaging is bright and attractive with an unmistakably Mexican influence. It would be hard to miss on a supermarket shelf with its metallic combination of green, red, and gold. The back of the package offers a brief description of the manufacturing process, interesting reading in itself. The expiry date is clearly printed, offering a long shelf life of several months; this is important as crisps need to be really fresh for maximum effect. I would like to see the product available in a bigger packet because this is useful when you are catering for several people, but that is a technicality: I can always buy two if necessary.

Described as 'a must have for all occassions', Tic Tacs have been freshening mouths since 1969 when the tiny mint was first release in the U.S.

In the 35+ years since it has grown to be one of the most popular mints in the world featuring in TV shows and movies such as 'Will and Grace', 'The Sopranos', 'The Simpsons', 'Dumb and Dumber', 'Home Alone' and even 'Shrek'.