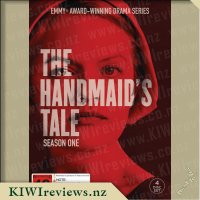 Based on Margaret Atwood's award-winning, best-selling novel, The Handmaid's Tale is the story of life in the dystopia of Gilead, a totalitarian society in what was formerly the United States. Facing environmental disaster and a plunging birthrate, Gilead is ruled by a twisted fundamentalism in it's militarized 'return to traditional values'. As one of the few remaining fertile women, Offred (Elisabeth Moss) is a Handmaid in the Commander's household, belonging to the caste of women forced into sexual servitude as a last desperate attempt to repopulate the world. In this terrifying society, Offred must navigate between Commanders, their cruel wives, domestic Martha's and her fellow Housemaids - where anyone could be a spy for Gilead - with one goal: to survive and find the daughter who was taken from her.

The Handmaid's Tale is a series I had heard a lot about, it has won 8 Emmy's and 2 Golden Globes, but I had never watched it. It looked like a series that could be based around the Gloriavale Christian Community here in New Zealand so I was intrigued to see what all the hype was about. From the first episode I was hooked! The Handmaid's Tale is based on the novel by Margaret Atwood and thrusts the viewer into Gilead, a fictional place that used to be the United States. The series uses flashbacks extremely effectively to show how June became punished in an America that is eerily similar to the country we now know. Some may say it's prophetic considering the current President of the United States! The fear of losing our rights and freedom overnight is a realistic and terrifying insight into the future!

Elisabeth Moss stars as June/ Offred and fully deserves all the accolades and awards she has won. She is utterly captivating and her performance is simply brilliant. Her hawk-like stares and facial expressions say so much when she can't, although we do get to hear a sarcastic commentary via her inner voice. It's a perfect central performance that isn't let down by those surrounding her and Ann Dowd is terrifyingly real as Aunt Lydia, who is responsible for training the Handmaid's. Simira Wiley plays Offred's feisty friend Moira whilst Yvonne Strahovski plays Serena Joy Waterford, an infertile and aloof wife, to perfection.

This is a powerful and intelligent series in that it allows us to glean information about this new world piece by piece. Thankfully there is no lengthy explanation and everything comes together perfectly. The cinematography basks Gilead in beautiful sunlight and the musical score is spot on. Songs like 'You Don't Know Me' by Lesley Gore, 'Don't You (Forget About Me)' by Simple Minds and 'Daydream Believers' by The Monkees are effectively used. The Handmaid's Tale definitely gets you thinking and the series is not for the faint hearted. It is tough to watch in places but if you want to be thoroughly entertained then watch The Handmaid's Tale immediately!. I'm already anticipating Series 2!

The Librarians are back! In this season they must take on the dual roles of hunter and hunted, as they find themselves fighting a war on two fronts. The Egyptian God of Chaos, is released from a museum in Egypt and is bent on releasing pure evil into the world to create a chaotic apocalypse.

Naturally, the Librarians must stop him... and must do so while also avoiding the new black-ops government agency D.O.S.A. (the Department of ... more...