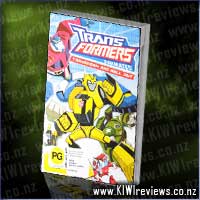 50 years earlier, a young rag-tag group of Autobots, led by Optimus Prime, stumble upon the most important artifact in Transformers history: the Allspark. Th Decepticons are in hot pursuit of the Allspark and it's secrets to to controlling the universe. Now Optimus Prime and his new band of Autobots must fight for their lives and the future of their home planet, Cybertron. Unable to escape the Decepticons, the Autobots crash-land in Lake Eire on the unknown planet called Earth, where they fall into stasis.

Our story begins when Optimus Prime and his young team are awoken from stasis, just in time to to help the 'organic lifefroms' (aka Humans) fight the villains in Detroit, but in order to save the humans and fight off the criminals they have to convert into their robot forms. In doing so, they save the day and become heroes, destined to fight all evil on the planet, and beyond.

My 8 year old son and I sat down to watch this with a hefty air of anticipation. A new twist on a classic from my childhood was certainly something I wanted to see...

I have to say, even though he is as much of a die-hard Transformers fan as I am, my son enjoyed it much more than I did. I wasn't overly impressed with the 'new look'... but let's face it, the kids are the target market and he loved it! He was glued to the screen with a focus I would *love* to see him apply to his homework!

But that's about as likely as a piece of mouldy Gouda cheese being elected Prime Minister. (Maybe an MP, though.)

Overall... this is certainly more one for the kids, and they'll get right into it if they like Transformers. If not... well, there are other Transformer DVDs out there that harken back to the classic style, it could be worth trying one of those.