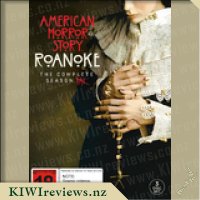 Life imitates grisly reality TV in one of television's edgiest and most acclaimed shows ever! Told in gripping true-crime documentary style, "My Roanoke Nightmare" - this season's show within the show - chronicles shocking paranormal events.

From a girl ghost to a swine monster to murderous nurse sisters to a sadistic cult leader known as "The Butcher" (Oscar winner Kathy Bates), the couple's home is filled with nonstop terrors.

Having watched all the seasons prior, I was rather excited when Roanoke hit Netflix and settled myself down to watch it. I had only just started watching it when I promptly turned it off, teeth raining down from the sky had me a tad spooked and I wasn't in the right zone to be spooked out. Eventually I got myself back into watching it, and though I was a tad confused at first by the layout of it, I soon adapted and enjoyed something so different to the previous five seasons.

The first half of this season has us jumping between the 'real-life' people giving their interviews and their version of events to the actors filming the series as a documentary type show. We all know the type, the big world of TV is filled with hundreds of reenacted events. The second half of the season then immerses the viewer fully into the 'reality' as the events claimed in the first half are proven to be real and not made up. I really liked this different style of show, getting to see in front and behind the character, different styles of the same character (since one was the actor, the other the survivor).

The acting in this was so well done, for once, none of the characters stood out more than the other, though the other side to this was that there wasn't anyone in particular that I was rooting for to survive. I liked the incorporation of a mystery that no one has ever solved and perhaps never will, the real-life Roanoke colony from the 1580's, and gave it their answer as to just what made them all vanish. There's plenty of blood and also plenty of tension to be had as everyone navigates the horrors they've found themselves immersed in. Though Roanoke and I had a rough start, we eventually got along and I think this is now my favourite season to date.

I had seen every one of the American Horror Story series and would absolutely count myself as a fan, so when I was given the opportunity to review "American Horror Story: Roanoke" I was looking forward to watching the entire ten episodes in one go. Not that I am into binge watching because I don't usually get the chance, but this was too good to miss.

From the start, I realised that this series was quite different from the others I was familiar with. Some of the cast members were the same, so it was reassuring to find that Sarah Paulson and Kathy Bates were both featured, but there were also several actors new to the series. The format was innovative, using the technique of a reality show and a system of double casting which meant that each character was played by two different actors who shared some basic similarities in appearance.

The series is actually organised into two five-episode sections. The first set, entitled "My Roanoke Nightmare", follows the fate of three people (Shelby and Matt Miller, and Matt's sister Lee Harris). It is set in a TV studio, where the "real" Shelby, Matt and Lee tell their story which is then re-enacted by three actors playing them; the second set, "Return to Roanoke: Three Days In Hell" brings the "real" three and their actor doubles together into an exploration of the scene of the original events. The second set also introduces three new characters - fans of the first Roanoke set who want to shoot something controversial about the location so that they can boost traffic on their website.

Many of the narrative and visual effects used throughout the series are reminiscent of those first used in films like "Natural Born Killers" and, later, "The Blair Witch Project". The media in both "Natural Born Killers" and "American Horror Story: Roanoke" promotes a particular brand of violence in order to lure viewers. The violence is packaged and marketed by the episode in order to keep viewers coming back for more.

"The Blair Witch Project", like "American Horror Story: Roanoke", features young people who have come to a particular forested area in order to document an urban myth. The visual style, however, is much smoother than that of "The Blair Witch Project" which was filmed entirely on hand-held camcorders. This made it quite challenging to watch.

In terms of originality, this series is a winner. The concept design from start to finish is amazing. Although it is a horror film with plenty of R18 gory sequences and other tasty offerings, with a good helping of scary special effects thrown in, there is an underlying thread of black humour which ensures that the story does not take itself too seriously. People are killed and then pop up again large as life, and actually analyse their own demise like an action replay!

I watched the entire series with a group of friends and they were all as riveted as I was. The acting was stunning: I would like to say that Kathy Bates was head and shoulders above the rest of the cast, but she wasn't - this is one film where there were no stars that stood out; the result was a cohesive presentation from every last person involved. I would love to see a future series of American Horror Story follow the same format. It is wonderful to see that the film industry is secure enough to be able to laugh at itself!