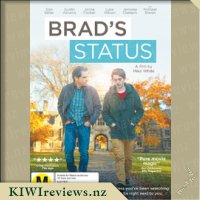 From the writer of School of Rock and The Good Girl comes a feel-good comedy-drama about friends you should forget, dreams you should let go, and the happiness you had all along.

After viewing this movie, I was left with the feeling that this was very much a journey within the zen tradition. The concept of living in the present moment, taking simple pleasure in where one's life is at rather than stressing about what might have been, is the message for Brad Sloan - a message that seems to be more easily accepted by his son Troy. The movie follows Brad's attempts to discover the reason for his perceived "low status" and his understanding of why former friends have ostensibly done so much better for themselves.

Brad, as played by Ben Stiller in one of his better performances, is at a crossroads as he tries to relive an improved set of his own life experiences through his son. His recurring daydreams continually reinvent his memories, blurring the boundaries of time, place and events. In his imagination, all four of his friends epitomise success in both their financial and their personal lives. The reality, which Brad must eventually face, could not be more different.

Ben Stiller's role carries the plot; all the other characters are dependent on their relationships with him. Even Troy (Austin Abrams) takes his cue from his father. I like the way that Abrams plays his part in such a low-key, matter-of-fact way. He manages to convey the link between father and son as one of equals, often showing himself to be the more practical of the two. Unlike his father, he is aware of the importance of Right Now and making the best of things.

Jenna Fischer, as Melanie, is well cast in her role of supportive wife and mother. Her character is understated at times, hovering in the background to support Brad once he comes to realise what is really important in life, and just being there as his anchor. Fischer's character, like Abrams', is pragmatic about the future and gives the impression that she is just waiting for Brad to see the light!

Of the actors playing the four "friends" from the past, Mike White is the most intriguing. Not only does he play the role of film-maker Nick Pascale, renowned for his pool parties and general flamboyance, but he also wrote the screenplay for the movie and directed it! This gives him the most buy-in of all the cast and crew. In the short documentaries which are included on the DVD version of Brad's Status, White talks about his creation and his interest in portraying the effects of middle-aged angst on people. However, it is important to watch the film proper before checking out the background material!

The other friends are played by Michael Sheen (as Craig Fisher, the TV personality); Jermaine Clement (as Billy Wearslter, who has made his money in the digital world and has taken early retirement in Maui); and Luke Wilson (as Jason Hatfield, whose wealth comes from successful investments). All three are remembered fondly by Brad, who has not realised that people grow apart; old friendships are frequently the casualty of changes in circumstances with the passing of time. Of the three, Michael Sheen has the biggest role, but all manage to convey effectively the essential flaws in their successes which Brad had not suspected.

This is a movie about self-awareness and ultimately finding contentment with one's lot. it combines humour and imagination with down-to-earth solutions, and if at times it seems somewhat slow moving, it is all about Brad's gradual acceptance of his true "status" - and the pace of the film reflects this. I found at times I was impatient as I waited for something to happen, but I guess that was part of the process for the viewer too!

Growing up, Rebecca never knew what lay behind the terror lurking in the dark. When she left home, she thought she'd also left her fears behind. Now her little brother, Martin, is experiencing the same unexplained and terrifying events that once tested her sanity.

A supernatural entity with a connection to their mother's past is haunting them, and as Rebecca gets closer to discovering the truth, her life and the lives of those around her are in danger ... once the lights go out.