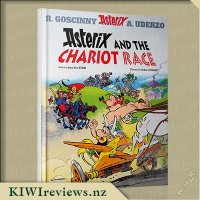 Disclosure StatementFULL DISCLOSURE: A number of units of this product have, at some time, been supplied to KIWIreviews by Hachette or their agents for the purposes of unbiased, independent reviews. No fee was accepted by KIWIreviews or the reviewers themselves - these are genuine, unpaid consumer reviews.
Available:
November 2017

The next action-packed adventure from Asterix and Obelix!

The roads across Italy are in disrepair. Defending his name, and to prove Rome's greatness, Senator Lactus Bifidus announces a special one-off chariot race. Julius Caesar insists a Roman must win, or Bifidus will pay.

Open to anyone from the known world, competitors arrive from far and wide, including Asterix and Obelix. With Bifidus secretly scheming, who will win this almighty chariot race?

As a kid, I spent a lot of time in the library. While the popular kids were in the common room gossiping and planning parties, and the athletic kids were outside trying to burn the physiques of Greek gods into their bodies, I was either reading reference books or escaping into other realms - doors were, and still are, like magic doorways into new and wonder-filled worlds. The ongoing adventures of Asterix were some of the funniest tales I could imagine, and almost as a side-effect they created a yearning to know more about the cultures shown in them.

Many years down the track and I was sad to see Alberto Uderzo retire from writing and illustrating the Asterix books. I admit, I stopped reading them at that point, but a reintroduction via a review copy was just too intriguing to resist. I am so glad I did give it another go, because despite a few small, and not overly significant alterations to some of the characters, the old magic is still strong in the writing efforts of Jean-Yves Ferri and illustrations by Didier Conrad. I once more found myself enthralled by the antics of feisty little Asterix and hos rotund and determined partner Obelix. I was also entertained by how Dogmatix was a feature character in this story too, acting as ice-breaker and bridge to some of the secondary characters.

Die-hard fans are probably aware of this, but it is still worth noting in case there are some of the old guard who gave up as I did... don't! This is every bit as enjoyable as all the classic tales and carries on the tradition and honour of the original creation by Goscinny even 40 years after his passing.

Overall, this is a great book and likely to become a treasured tale passed down to the next generation, as I proudly pass this to my youngest son so that he may form the next generational link in the fan-chain of these two charming Gaulish rogues.

This is the hilarious diary of a young frog desperate to win the role of human princess in her school production of The Frog Prince. She's sure she's pretty enough (she has more warts than any other girls in class), but will she ever overcome her terrifying case of stage fright?