The Dead and Buried review 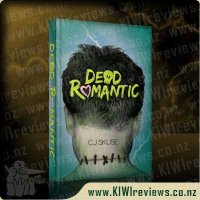 Disclosure StatementFULL DISCLOSURE: A number of units of this product have, at some time, been supplied to KIWIreviews by Scholastic (NZ) or their agents for the purposes of unbiased, independent reviews. No fee was accepted by KIWIreviews or the reviewers themselves - these are genuine, unpaid consumer reviews.
Available:
April 2013

Camille wants to find the perfect boy, with an athlete's body and a poet's brain. But when she's mocked at a college party, she knows there isn't a boy alive who'll ever measure up. Enter Zoe, her brilliant but strange best friend, who takes biology homework to a whole new level. She can create Camille's dream boy, Frankenstein-style. But can she make him love her?

Selling Points:
•  Darkly comic chick-lit with a twist
•  For every girl who has ever been rejected in love
•  Brilliant play on Mary Shelley's Frankenstein
•  From a highly acclaimed young adult author

I certainly did lose track of time while reading this book, pretty much reading it all in a night until I realized it was 1.30 in the morning and I better get to bed and finish the final few chapters in the morning. It really was an interesting read that kept me wanting to read more to find out what happened.

Being aimed at young adults it definitely was a book suited to teenagers of about 15 plus in my opinion as there were some interesting language choices and lots of sexual references. For this reason I would not allow my 11 year old to read it as the themes are definitely to old for her.

The story was a perfect teen read though with the story line running along the lines of a young teen looking for love in all the wrong ways, and another young girl who just needed a friend. I think a lot of teens could easily relate to the story line. Lots of morals of the story such as we love and lose and nobody is every perfect which are good morals for teen girls.

I really enjoyed the dark side of this book with dead bodies and Frankenstein-like experiments which although unbelievable keep you interested.

The one thing I didn't so much enjoy about the book was the ending as it just left me hanging as to whether the experiment was successful and what the teens were going to do next. Which has left me questioning whether there will be a sequel or if that is it and I am never going to find out the answers.

During James T. Kirk's heroic five-year mission as captain of the Starship Enterprise, a mysterious alien threat called "The Totality" commenced its stealthy invasion of our galaxy, intending to conquer the Milky Way Galaxy as it had conquered the galaxy of Andromeda. Now the time for secrecy has passed, and a war unlike any other has begun--one that threatens to destroy the Federation, first by bringing warp travel to an end, and then by ... more...