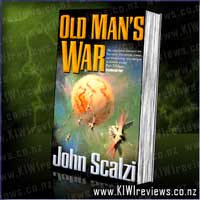 Disclosure StatementFULL DISCLOSURE: A number of units of this product have, at some time, been supplied to KIWIreviews by Macmillan Publishers Ltd or their agents for the purposes of unbiased, independent reviews. No fee was accepted by KIWIreviews or the reviewers themselves - these are genuine, unpaid consumer reviews.
Available:
April 2008

John Perry did two things on his seventy-fifth birthday. First, he visited his wife's grave. Then he joined the army. The good news for humanity is that we have finally made it into interstellar space. The bad news is that there are few planets out there fit to live on, and plenty of alien races willing to compete for them. Therefore we must fight: to defend Earth itself, and to stake our claim to planetary living space. Far from Earth this conflict has been going on for decades, brutal, bloody and unyielding.

Earth itself is now a backwater, with the bulk of humanity's resources in the hands of the the Colonial Defence Forces. But you can not join the CDF until you reach retirement age because they don't want young people, only those with the knowledge and skills amassed during decades of living. Once you join the CDF, you'll be taken off Earth and never allowed to return. First come two years at the front and, if you survive, you'll be given a generous homestead stake of your own on one of those hard-won colony worlds.

When John Perry agrees to this deal, he has only vaguest idea of what to expect. Because, light years from home, the actual fight he faces is far harder than he could imagine... and what he himself will become is far stranger still.

Every now and then I come across a book I have to wade through, dragging my eyes across page after page, hoping beyond hope that either the story is going to pick up, or the book is magically going to run out of pages and be half-full of adverts or something...

This book is the complete opposite.

This book grabbed me right from Chapter 1... It really had that special something that makes a debut story into an instant genre-leader. Like many sci-fi authors before him, Scalzi has leapt out onto the world sci-fi stage with his cape flapping and a big 'Classic Author in the Making' sign stitched to his front, and yelled "Check THIS out, people!" at the top of his literary voice. A lot of eyes will turn to watch this one...

This story is somewhat reminicent of Robert A. Heinlein's "Starship Troopers" story, which was made into not one, but two movies and a series of CGI spin-offs... all of which were utter rubbish compared to their originating book. In that regard, I sincerely hope Scalzi stays strong and refuses to soak up any loose change Hollywood tries to throw his way... it would be an utter shame to take a story, and a universe, this rich and complex and squeeze all the goodness out of it and stuff it on a big screen somewhere. However, it holds some potential as a computer game, since they are becoming seriously decent in terms of graphics and gameplay.

There were some loose threads left at the end of this book, but that is forgivable when you take into account it was Scalzi's debut, and has become the pointman for (hopefully) a platoon of follow-on tales set in the same universe. His second CDF tale, The Ghost Brigades, follows on nicely from this story, which introduces us to the universe of the CDF in an exciting and powerful way.

Overall, action-packed, blunt and brassy, this is a tale any sci-fi, space-combat buff is going to love. If this is what Scalzi has to offer in his early days, I can't wait to see what he can present to us as a mature master of the genre. Time will tell...