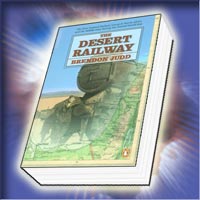 Disclosure StatementFULL DISCLOSURE: A number of units of this product have, at some time, been supplied to KIWIreviews by Penguin Random House or their agents for the purposes of unbiased, independent reviews. No fee was accepted by KIWIreviews or the reviewers themselves - these are genuine, unpaid consumer reviews.
Available:
May 2004

Overlooked in other war histories, these men played a significant role in the Allied victory in North Africa. The desert railway became a crucial strategic operation transporting soldiers, equipment and supplies to the front line. The Germans were determined to destroy it.

The various challenges they faced, from relentless bombing, to the dreaded fifty-day-long khamseen winds, to the siege of Tobruk, culminating in the second Battle of El Alamein, during which Field Marshall Montgomery stated, 'Well, now it's the railway versus Rommel.'

The Desert Railway is a tribute to the courage and enterprise of these railwaymen who kept the trains running no matter what.

This book is the only book I've read (to date) that even mentions the NZ Railway Group, but this book does so much more than that.
This awesome piece of information packed literature shows the sheer kiwi determination to get the job done.
This book took me a while to get into, fully, especially with all the broken reading time, but once i sat down and started the book over again, reading the book, cover-to-cover, it made a whole lot more sense, and i followed the story easier.
If you're a WWII historian, or someone interested in railways, both military and civilian, then i suggest this book for you because iyt is so information packed.
This book tells of the triumphs and the short falls of the NZRG during the Second World War.
You know you have a good book, when you go from not knowing a single thing about a group, or subject, to knowing almost everything there is to know... And that's whaat we've got here.
Everything from the beginning to WWII, with lists of those who served this group, and also a list of those who paid the ultimate sacrifice for their country... Pro Patria Mori.

If you are interested in rail history, this is certainly a book you need to get. Mostly overlooked in most historical documents, the New Zealand expertise that worked on the Desert Railway in WW2 is clearly covered from a series of personal perspectives in this book.

Scattered photos, maps and diagrams give a face to the tales of those who were there, working in sometimes dangerous environments, trying to link the ports with iron and stream, sweat and blood.

Overall, a bit light on the photos, but what can we expect. This book has serious historical value, and will be a valued part of any history or rail enthusiast's book collection.

What child doesn't imagine being able to fly? Well, Bear is no different. When he sees seagulls at the beach whirling and diving, he must learn how. Luckily, there are four children who know exactly how to make that happen: Take a trip to an amusement park and play on all the rides. "Swoopy swoopy swoopitty swoop"!An exhilarating story that showcases Rosen's signature lyrical style, "Bear Flies High" is another perfect read-aloud with a familiar and lovable character.