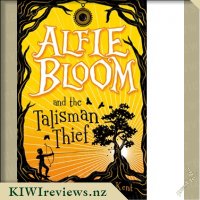 How Not To Stop A Kidnap Plot
Rating: 9.0

I enjoyed this book right from the very first page, and so did my review partner, Mr 12. Neither of us had realised until we started reading that this was the second book in a trilogy - but the author has done an admirable job of weaving the necessary background information into the very first chapter, so we did not feel that we had missed out on anything significant. Alfie and Artan, two of the main characters, are introduced right at the start and, as each new character appears, he or she is skilfully placed in context. I have read so many books that lack this background information and have struggled to know what exactly is going on, so it is brilliant to find a book that is so on to it.

Mr 12 enjoyed the way the four children interacted so naturally. Alfie's best friend Amy and his twin cousins Madeleine and Robin are all around the same age; when they are not working as a team, they are teasing one another and having fun as they continually discover new things about Hexbridge Castle. Things are nearly always changing and proving to be different from the way they first appeared, and this is a source of amazement for everyone. Not only the castle itself, but the people in it are seldom what they appear to be. In fact, this is a story that requires you to believe in magic or you won't enjoy it at all.

A magic talisman, an enchanted lens, potions with amazing healing powers, swirling mists that cause those who go too near them to forget everything, a flying bear that is a type of magic carpet, elves, sprites, time travel, portals to another world - what does this book not have? It is easy to immerse yourself in the story as you travel deeper into a fantastic place that rivals the Harry Potter series for excitement. Mr 12 is not one to be gullible, but after he had finished the book, he said that he found it hard to stop believing in the events because he was so caught up in them. I agree with him totally; once you have entered the world of Alfie, you are drawn into the intrigue and it is impossible to stop!

Apart from the magical elements and the struggle to rescue various people from Merioch (because almost everyone, at some point, is captured!), there is the added interest in trying to decide exactly who is who. During the course of the story, different characters are revealed as being someone quite different and unexpected from what they had pretended to be (or thought they were!) Revelation follows revelation as everyone's true nature emerges. I found this fascinating, as did Mr 12. It is testimony to the power of the book that both of us had finished reading it in under three days. Now we want to read the first and third books in the trilogy. If they are as good as the second, they will be simply amazing.

Husband-and-wife team Sam and Remi Fargo are intrigued when an archaeologist friend requests their help excavating a top secret historical site. What they find will set them on a hunt for a prize greater than they could ever imagine. The clues point to the hidden tomb of Attila the Hun, the High King who was reportedly buried with a vast fortune of gold and jewels and plunder... a bounty that has never been found.