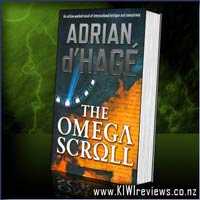 Disclosure StatementFULL DISCLOSURE: A number of units of this product have, at some time, been supplied to KIWIreviews by Penguin Random House or their agents for the purposes of unbiased, independent reviews. No fee was accepted by KIWIreviews or the reviewers themselves - these are genuine, unpaid consumer reviews.
Available:
September 2005

An action-packed novel of international intrigue and conspiracy. When the Dead Sea Scrolls were found in a desert cave in Egypt, they threw new light on the scriptures of the Christian Church. But in this novel, one scroll, the Omega scroll, mysteriously disappears and the knowledge it contains is lost to humankind.

Legend has it that those who come into contact with the scroll never see daylight again. Scientist, Allegra Bassetti and Professor David Kaufmann are slowly piecing together the fragments of an ancient papyrus text, what they believe to be the Omega scroll.

It is only a matter of time before they crack the code; but unbeknown to them one man, the ruthless Secretary of State to the Vatican, Cardinal Petroni, will do everything in his power to keep the legend of the scroll alive and its secrets hidden forever.

Having more than a casual interest in what lies behind conspiracy theories, hidden messages and cypher codes, and commonalities between various world religions, I was very impressed by this title. Though it didn't have quite the quantity of 'hidden things revealed' as Dan Brown's 'The Da Vinci Code', but it has something that still appeals to me greatly. This book has nearly 500 pages, and I was totally hooked by page 4. That is a rare thing, and I feel it is the hallmark of an excellent author in full control of their talents.

Another thing I really liked about this title was the frequent use of other languages, including Italian, Latin and Farsi, all of which were used in such a way that I could easily comprehend the syntax, and enhance my linguistic skills. By the end of the third chapter, I found that I didn't really need many of the English translations to help me. I found this quite exciting, since I have trouble enough with my native language, let alone try to comprehend any others

This book is jam-packed with information folded into so many layers, I think I will be re-reading this one at least once more, when I have time, just so that I can extract as much from it as I can. I wasn't able to really throw myself deep into it, so it lost a point on the LToT score, but when I did have a chance to read it, 3-4 chapters would just flash by.

Overall, I found this title to be a wonderful addition to my library of 'Books about ancient secrets' and look forward to my retirement... because I suspect that will be my next opportunity to read it properly.

The hugely talented team behind the Despicable Me movies turn their talents to the Minions in the hotly anticipated 2015 movie. A prequel to Despicable Me and Despicable Me 2, Minions tells the story of the loveable henchmen before they entered into Gru's employ, and charts their story through the centuries as they search for the ultimate evil mastermind to serve. This hardback seek and find is the perfect activity book for Minions fans.