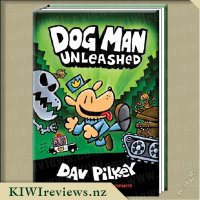 I was so thrilled to review a copy of this Dogman sequel. My eldest daughter is an avid fan of Pilkey's. She had been told by friends that this book existed and she had been hounding me (pun intended) to get her a copy. I hadn't spied it in the stores at the time, so getting my hands on a review copy was like fate.

I took it home, and the sound she made when I showed her the book was quite piercing. She took the book immediately to her room. When she came out again, she was sniggering and flipping through the pages. She sat on the couch in silence, reading this book. Occasionally she'd motion for her little sister to come over and she'd quietly read a joke aloud.

Her sister was thrilled to be in on the jokes and she liked the pictures in the book as well. My eldest found the book inspiring, and even did a few of her own comic books, though mainly Pokemon themed. She also liked the art helper in the back for drawing some of the characters. These are interesting and quite silly as well, which is in keeping with the rest of the book.

While I have seen her take to books recently, this was the first book I think I have seen her read by herself with such passion. Later she even read through it aloud to me, which was just awesome. These books are great for new and reluctant readers. Anything that gets a kid that excited to read, and that engrossed is a winner.

This book wins because it follows up on the already successful Dogman comics, with some new stories. My kids love Dogman, and they especially seemed to like some of the new villains too. The book was funny for kids and had a few jokes for parents too. It was a bit gross in parts, but that's how Pilkey hooks children into reading.

Miss Five's eyes lit up when she saw that this was a graphic novel. She is just learning to read and can often make out the words when the pictures are there to help. The shiny hard cover was also a plus as she said she was holding a "real" book and not a kiddy picture book! I said I would read it to her and she said she would help me out with some of the words!

It did not take long for us both to be engrossed in the story. She found it perfectly logical that Greg the Dog's head and Officer Knight's body were combined to make a new composite cop with the talents and skills of both, and said it was absolutely the most sensible thing to do. However, she soon started laughing when she learned that Dog Man had some interesting habits like slobbering all over people and rolling in smelly things like dead fish.

The story itself is fun - although it is basically fantasy, there are some worthwhile learning opportunities in it as well, like the characteristics of dry paper vs wet paper or the way that some dogs can be totally distracted by toys like balls. We stopped frequently to talk about the different things Dog Man did and whether or not we thought he was right. Lots of family members have dogs so, although Miss Five does not have one of her own, she is used to them and their unique ways!

She mastered the Triple Flip-o-Rama easily - her brother already has a couple of books with single Flip-o-Rama pages - and demonstrated how it worked so I could try it too. There are several of these pages - both single and triple - scattered throughout the book, featuring Dog Man involved in various hilarious activities. They are useful for hand-eye coordination as you have to hold the page just right to make it work.

There is a bonus activity at the end of the book: a cartoon worksheet for budding artists who would like to learn to draw Dog Man, Petey, Flat Petey, Flippy or Zuzu. I am hopeless at drawing but even my attempts were reasonable, and Miss Five produced some wonderful drawings. There are more activities on the pilkey.com website. This is a great way for children to get more enjoyment out of a book, and encourages them to go back and read it again.

The High Druid of Shannara trilogy draws to a thrilling conclusion.

Young Penderrin Ohmsford has been charged with the daunting task of rescuing bis aunt Grianne, Ard Rhys of the Druid order, from her forced exile in the terrifying dimension of all things damned: the Forbidding.

With the noble dwarf Tagwen and the prodigal elven princess Khyber Elessedil by his side - and with the outcome of the bloody war ... more...