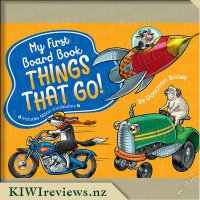 Disclosure StatementFULL DISCLOSURE: A number of units of this product have, at some time, been supplied to KIWIreviews by Hachette or their agents for the purposes of unbiased, independent reviews. No fee was accepted by KIWIreviews or the reviewers themselves - these are genuine, unpaid consumer reviews.
Available:
August 2017

My First Board Book: Things That Go product reviews

Everything You Need to Know about the Human Body
Rating: 8.3 Miss Nine Months (now almost ten months!) was thrilled to receive a second book in this series to review. She is fast becoming Miss Independence, enjoying doing things for herself as she gradually becomes more mobile, and in the process proving to the world (and herself) just how capable she is. This extends to books; she loves "reading" on her own and is limited only by the size and format of the volume.

This series is perfect as it offers a sturdy board construction which is compact enough for little hands to manage. It is not too heavy so she can lift it and turn the pages comfortably. There are also lots of pictures for her to pore over; the fact that she sometimes reads the pages randomly rather than in sequence is not an issue because each page offers different information.

As a simple introduction to physics, the book is perfect for little ones. They can learn about movement at a very basic level, imitating the sound and movement of each of the machines. Many of them are items that can be spotted in everyday life, encouraging the child to return to the book and find the corresponding picture. Some of the pictures actually convey movement - the motorbike, for example, shows the scarf floating behind the driver, and the steamboat features smoke wafting back from the smoke stack.

The animals driving each machine are 100% kiwi critters. There are plenty of different animals, both wild (like the kiwi who pops up more than once), and domesticated (like the cows and cats). There is even a guest appearance by a black singlet clad human who is seen driving the ute with a rather illegally placed cat sitting on his knee and helping to drive!

What makes the book extra special are the bold colours (mainly primary) and the way the words are presented in both languages, English and Maori. Even adults whose reo is a bit rusty can pick up the odd word along with the children they are reading to. The font is clear and simple, and all in lower case so that it is more accessible for beginning readers.

I like the idea of including a "quiz" section in the book where some of the pictures are reproduced on just two pages, and the child has to try to identify each one. Not all the pictures appear on the quiz pages but there are others on the front and back covers. For a little one just learning to identify objects through a graphic, the quiz idea extends their skills of recognition as they look at pictures out of the original context.

Personally, I am sold on this series and so it Miss Nine Months. Hopefully the next in the series will appear while she is still small enough to review it for me - she is certainly a willing helper. And it is delightful to see a little one really getting into her reading at such a young age.