Home > Categories > Books > Fantasy > Every Which Way But Dead review

ProdID: 2656 - Every Which Way But Dead
Written by Kim Harrison 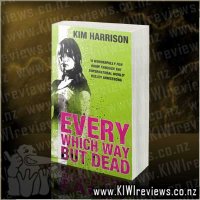 Every Which Way But Dead product reviews

If you make a deal with the devil, can you still save your soul?

To avoid becoming the love-slave of a depraved criminal vampire, bounty-hunter and witch - Rachel Morgan - is cornered into a deal that could promise her an eternity of suffering. But eternal damnation is not Rachel's only worry.

Her vampire room-mate, Ivy, has rediscovered her taste for blood and is struggling to keep their relationship platonic, her boyfriend, Nick, has disappeared - perhaps indefinitely, and she's being stalked by an irate pack of werewolves.

And then there's also the small matter of the turf war raging in Cincinnati's underworld; one that Rachel began and will have to navigate before she has the smallest hope of preserving her own future.

The third thrilling title in The Hollows series, and still running strong! The story opens with Rachel on the brink of a gamble she is certainly hoping to win - if she does, she gets everything she needed to wrap up the big finish from Book 2 and stands to outsmart a demon... but if she fails she'll lose everything and not even get a chance to say goodbye to those who care about her as she is ripped from the mortal world and taken into the Ever-After.

This instalment not only revels more of Rachel's history, and links to Trent Kalamack's family and the true cause behind Trent's need for great wealth and their history at the 'holiday camp' all those years ago, but also the real history of hate between Elven and Demonkind and why the Elves have let the world believe they are extinct.

Rachel also discovers a lot more about her true nature and how much further she can push her powers than she ever dreamed of. Her relationship with her human boyfriend Nick is strained, to say the least, by the events in Book 2, and this is further explored here. With a reaffirmation of bonded partnership with Ivy, the break in the relationship with Jenks, a surprising series of offers given and withdrawn by a mystery Were, and some serious sidetrips to places she would never have dreamed of going, there is plenty to keep the avid reader locked into this wonderful world Kim Harrison has built for us to enjoy.

Overall, if you can forgive the odd temporal 'jerk' as your subconscious realises the timelines don't quite match up in places - with patches of intervening 'uneventful downtime' being utterly ignored - then the story is brilliant, as expected. Rachel is a character who has to do some questionable things in order to survive, but rarely with the intent to harm or in anger, yet still retains an air of... well, it could be claimed 'innocence', but I think more accurately 'uninformed naivety'. As I write this, I am already reaching for the copy of A Fistful of Charms with anticipation.

A wonderfully noisy picture book, featuring brand new characters, from the creator of the bestselling The Duck in the Truck. While Farmer Dougal sleeps, Sheep and his friends board the tractor and take turns making engine sounds. But what if their loud honks, moos and squeaks wake the farmer!? Children will love copying animal noises in this joyful story about the power of imaginary play from the internationally renowned creator of Duck in the Truck and Hug.