Sebastian Lives in a Hat review 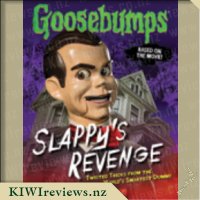 Disclosure StatementFULL DISCLOSURE: A number of units of this product have, at some time, been supplied to KIWIreviews by Scholastic (NZ) for the purposes of unbiased, independent reviews. No fee was accepted by KIWIreviews or the reviewers themselves - these are genuine, unpaid consumer reviews.

Get inside the twisted but hilarious brain of Slappy, the genius dummy who is undoubtedly R.L. Stine's most infamous creation. This is Slappy's exclusive tell all on how to wreak havoc and make mayhem.

Kids will learn all his sinister and spooky secrets, Slappy's favourite jokes, quizzes, top 10 lists and much more. It is everything kids need to make some serious mischief.

This book is set out as if Slappy himself is recruiting the reader to Trick Club. There are rules to being in Trick Club which you must follow. The boys enjoyed making up there own alias and laughter was involved. The boys also enjoyed reading Slappy's version of acronyms such as BRB standing for Barf Right Back instead of Be Right Back and have spent much of the day speaking to each other using theses acronyms and taunting their sister with them.

They have also been begging to have Scrambled Legs for lunch. Yes you read that correctly! This book is definitely a boys will be boys kind of read! There are activities throughout the book to keep the reader entertained, thinking and intrigued in the book. This book also contains profiles of the characters from the movie which we really enjoyed. The boys favourite part of the book was the quiz, we can all agree the boys need to read a few more goosebumps books then try the quiz again!

Great book for Goosebumps fans, the photos from the movie are fantastic, the text is slightly creepy but easy to read. The pictures are fantastic and the book is a lot of fun! See you in your screams!

I sat down with my daughter to read this book. I thought it was much like the activity book we had already started but it was smaller and seemed to be largely focused on Slappy the Dummy rather than the other Goosebumps monsters. As I was reading, I noticed that the prose is all written as if Slappy is speaking directly to the reader and/or listener. Unfortunately, Slappy isn't very nice. Of course, he isn't! He is a scary horror dummy. However, he basically calls the reader stupid for a large portion of the book. As a result, my daughter was not too thrilled.

Once she stated that she didn't feel that he was being very nice and she didn't want to be told that she was a numbskull anymore, I decided to quickly rescue the situation. I flicked through and realised that about 67 pages in, the focus of the book changes to the heroes from the movie.

We happily read the fact files in the second part of the first sitting. The focus on the heroes of the movie was cool. We enjoyed the short quiz too though the last question didn't work too well for us as we hadn't read many of the Goosebumps books. The jokes were pretty good and I'll be saving some of those for Halloween 2016.

The next time we sat down with the book, I had already had a quick re-read of the book to see what else was in there. What I could see was that aside from the Slappy focus, there were some cool activities for making up your own creepy characters and story-lines for your own horror story. Keeping the focus on that with my daughter meant that she got a lot more out of it the second time around and we had fun thinking up some real awful creatures, most of which were constructed out of sewerage.

Visually this book follows the same look and feel of the other Goosebumps books released for the movie. The pages are full colour, there are some great photos from the movie in there. The fonts and backgrounds on all the pages are creepy, but still easy enough to read. My daughter is quite sensitive about being thought of as stupid though, so that was the only thing that really backfired with this book. If you have an easy going kid who likes a laugh, even if he or she is the focus, this could be a winner. Also for any budding horror fiction writer, this would be a great help in getting the imaginative juices flowing.

For the first time ever, Mouseford Academy is offering a course in outdoor survival skills, and it's being taught by the athletic, adventurous Bruce Hyena! All five Thea Sisters sign up, along with the Ruby Crew. But when a terrible storm hits during the two-day outdoor challenge, there are mouselets in danger. Who will come to the rescue?