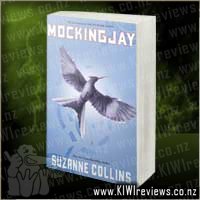 Disclosure StatementFULL DISCLOSURE: A number of units of this product have, at some time, been supplied to KIWIreviews by Scholastic (NZ) or their agents for the purposes of unbiased, independent reviews. No fee was accepted by KIWIreviews or the reviewers themselves - these are genuine, unpaid consumer reviews.
Available:
September 2010

Against all odds, Katniss Everdeen has survived the Hunger Games twice. But now that she's made it out of the bloody arena alive, she's still not safe. The Capitol is angry. The Capitol wants revenge.

Who do they think should pay for the unrest? Katniss. And what's worse, President Snow has made it clear that no one else is safe either. Not Katniss's family, not her friends, not the people of District 12.

Powerful and haunting, this thrilling final instalment of Suzanne Collins's ground-breaking The Hunger Games trilogy promises to be one of the most talked about books of the year.

Having survived two Hunger Games Katniss must now join the fight against Capitol. With her home now gone, and its people refugees, Katniss must not only figure out who she is deep down inside but who those around her really are and is everyone she fights beside really in it for the right reasons.

This book still has a lot of focus on her relationship with Gale and Peeta and figuring out who, if either of them, she wants to end up with when all is said and done and the fight is either won or lost. President Snow is still as formidable as ever and the key factor of fear in Katniss' world.

A well written book and a great ending to the series, my only gripe is that the epilogue made me feel like Katniss was still a 16 or so year old girl and not an adult. But other than that it is a good book and a nice and easy read.

I purchased this for my Kindle after finishing the first book and knowing I couldn't stop until I had read them all. This is an excellent end to an excellent trilogy, I haven't read a series as good as this in a long time. Some of the plot twists were expected but their execution was very well done and kept me reading, I managed to finish it in less than 4 days while living my life as well.

This truly is the wrap up to the series so needs to be read in order, that said you'd be silly not to have read the previous two books before this one since it's an obvious trilogy. Having read the authors notes on the trilogy I would recommend the trilogy for mature teenagers and beyond as I believe her message is an important one. I also wouldn't leave it in the realm of a teenagers book, I feel adults have a lot to learn from reading it as well.

A stunning finale to one of my absolute favourite young adult series of all time. What began as a less gory, more intelligent version of Battle Royale in Collins' first book, The Hunger Games, has grown and evolved into a beautiful and philosophical love story set at the edge of civilization. It's the sort of story that makes you think 'what would I do in that situation'. It makes you care about the characters and then sometimes it takes those characters away, but ultimately, it is a story that leaves you with some hope for humanity at the end of the world - which I really appreciate.

Definitely a story for the more mature end of the young adult spectrum, it has a darkness to it comparable with the final Harry Potter books. I would also highly recommend reading this trilogy in order as each book is intimately linked to the next. By the time you have read the first two, you won't need a review to recommend the final book - it will be a must read.

Eccentric billionaire Warren 'Wheelie' Wheelnut has decided to mount the biggest, maddest, most off-the-scale competition ever! He has created five extreme racetracks: from underwater to the desert, outer space, a haunted town and the jungle...it's not chicanes and hairpin turns the drivers need to worry about, but aliens and giant squid! Deep Sea Dash takes the teams on an adventure beneath the waves to face polar bears, giant squid and undersea volcanoes! Which team will defeat sharks, jellyfish and more, to cross the finish line first?