ProdID: 6498 - The Girl Next Door
Written by Ruth Rendell 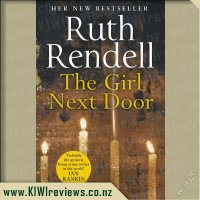 The Girl Next Door product reviews

When the bones of two severed hands are discovered in a box, an investigation into a long buried crime of passion begins. And a group of friends, who played together as children, begin to question their past.

'For Woody, anger was cold. Cold and slow. But once it had started it mounted gradually and he could think of nothing else. He knew he couldn't stay alive while those two were alive. Instead of sleeping, he lay awake in the dark and saw those hands. Anita's narrow white hand with the long nails painted pastel pink, the man's brown hand equally shapely, the fingers slightly splayed.'

Before the advent of the Second World War, beneath the green meadows of Loughton, Essex, a dark network of tunnels has been dug. A group of children discover them. They play there. It becomes their secret place. Seventy years on, the world has changed. Developers have altered the rural landscape. Friends from a half-remembered world have married, died, grown sick, moved on or disappeared. Work on a new house called Warlock uncovers a grisly secret, buried a lifetime ago, and a weary detective, more preoccupied with current crimes, must investigate a possible case of murder.

In all her novels, Ruth Rendell digs deep beneath the surface to investigate the secrets of the human psyche. The interconnecting tunnels of Loughton in The Girl Next Door lead to no single destination. But the relationships formed there, and the incidents that occurred, exert a profound influence - not only on the survivors but in unearthing the true nature of the mysterious past.

I've never heard of Ruth Rendell and was surprised to hear that she has over 200 books. Based on the cover and the back page, I wouldn't willing choose to read this book. It is only that it says murder that I jumped at the chance and because my husband's best friends name is Woody. The cover is brown, has candles and is a bit boring.

I was not disappointed by page 5. "No one ever called him Woody again." This book is a bit slow in parts but it all happens for a reason and the build up of how the hands came to be there. I would have loved somewhere like the Qanats to play but would they be considered safe as they possibly might have way back then?

About 2/3 of the way in, we get more excitement even if only for a minute and who would have known a family gathering to end like that?? I've often wondered why one of mine hasn't ended in a similar manner. There are a few oddly short laid out paragraphs throughout the chapters but I somehow found this comforting rather than the continuous rampage of words.

The hand's brought everyone together again, well everyone who was alive. Bad things have come from them being found, 1944 was decades ago. The large shock of the book is made near the end about Woody and the girl next door, about what they had done and what she had seen.

In the end Michael is happy but remember, everyone has to die sometime. If you like books with murder and suspense, I strongly suggest you get this book.

A humorous and fast-paced story about how a group of clever swamp animals pluck up the courage to outsmart the bossy alligator. Young readers will enjoy the suspense and feel empowered when the smaller swamp animals successfully outwit the SNAP SNAP SNAPPITY SNAP alligator!