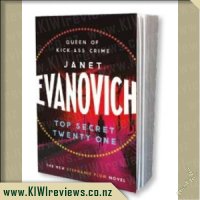 Disclosure StatementFULL DISCLOSURE: A number of units of this product have, at some time, been supplied to KIWIreviews by Hachette or their agents for the purposes of unbiased, independent reviews. No fee was accepted by KIWIreviews or the reviewers themselves - these are genuine, unpaid consumer reviews.
Available:
June 2014

Catch a professional assassin: top priority.
Find a failure-to-appear and collect big bucks: top score.
How she'll pull it all off: top secret.

New Jersey's favorite used-car dealer, Jimmy Poletti, was caught selling a lot more than used cars out of his dealerships. Now he's out on bail and has missed his date in court, and bounty hunter Stephanie Plum is looking to bring him in. Leads are quickly turning into dead ends, and all too frequently into dead bodies. Even Joe Morelli, the city's hottest cop, is struggling to find a clue to the suspected killer's whereabouts.

Death threats, highly trained assassins, highly untrained assassins, and Stark Street being overrun by a pack of feral Chihuahuas are all in a day's work for Stephanie Plum. The real challenge is dealing with her Grandma Mazur's wild bucket list. A boob job and getting revenge on Joe Morelli's Grandma Bella can barely hold a candle to what's number one on the list - but that's top secret.

I enjoyed this book from the moment I picked it up and it was one of those "Can not put it down" reads! I did not want to put it down and could not wait to get back to it! I read this is a record time of time of two days, not an easy feat in the School Holidays! Stephanie Plum the main character is a right laugh and easy to relate too.

The book is listed as a Crime/Thriller and there is plenty of that but it is also very humorously written so provides plenty of laughs as well as suspense while there is a few heart tugging moments.

This is part of a series so I feel I should have read the other books first but didn't. Still the story was easy to get in to and after reading reviews on the rest of the series where people have said its much of the same I am kind of glad I just jumped straight in and didn't bother with the others. I'm on the fence about whether that was the right decision.

I loved the characters especially Stephanie's slightly eccentric Grandma. There is definitely built up sexual tension on Stephanie's part which made it all the more enjoyable. If nothing else Stephanie's Grandmothers ways are sure to entertain you. I would read this again, fast, funny and adventurous!!

The extraordinary role of viruses in evolution and how this is revolutionising biology and medicine. Darwin's theory of evolution is still the greatest breakthrough in biological science. His explanation of the role of natural selection in driving the evolution of life on earth depended on steady variation of living things over time - but he was unable to explain how this variation occurred. In the 150 years since publication of the Origin of ... more...