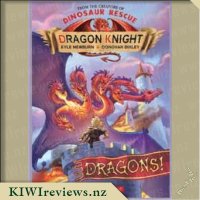 The terrifying cyclorgs want their gold back NOW. If Merek can not outwit the evil Lord Crumble, the village is doomed.

Books one, two and three have been a hit in this series so it is no surprise that book four Dragons was also a resounding success with Miss Seven and her dad.

This book follows the same lines as the others with dragon's, knights, gold and adventures and as every good story needs a knight undercover in the form of Mereks friend Brin. I think Brin as a knight undercover brings some good girl power to the story that Miss Seven really appreciates. Merek with his quick thinking and shape shifter powers saves the village from the cyclogs in a great story.

Miss Seven and Dad were enjoying this book so much that Miss Four and I had to read it as well and we both really enjoyed it. Miss Four loves the illustration's which really are just so perfect. Kyle Mewburn and Donovan Bixley are a great team. I think this book will be getting read again as MIss Eight has started to get a bit interested as well and took this book to bed with her tonight. We all declared this book the best of the lot I think because of the gold and the cyclogs (and Brin, says Miss Seven!)

I can definitely recommend this book especially if you have enjoyed the others in the series. This series is just getting better and better.

Dragons is book 4 in this series and so far my daughter and I have read every single book. Her favourite character is Merek, though I am very fond of Brin too - bringing in a bit of strong female awesomeness to the story. She didn't feature too heavily in this book, though we did have a bit of a reveal about her which was neat. I love how in each book so far, we get to know more and more of the characters around Merek. Each book opens up more of their back story, but not in a overly obvious way too. It's just natural progression.

Percy, the nasty character we don't like very much, was also not a huge feature of this book, but his father's greed is fairly central. As usual Merek heads off to knight school, and they learn about something. This time it was falconry. This was really interesting for me, because I had just seen a documentary about different falconry birds and how they would differ depending on your station in life. That information was reflected in this book too, so although you get a sense that the book is full of "nonsense" facts, there is definitely some good educational stuff in there too.

Neither of us liked that the birds eyelids were tied down. We also didn't enjoy what the birds were being asked to do. But I get queasy very easily, and Miss 8 is a big bird lover. Still, it was important to the story and allowing the reveal of the main plot to take place. Miss 8 really liked the cyclorgs, and wanted more information on them. Aside from her love of birds, she is hugely into dragons at the moment. She wanted to know more because it looked like what she imagined a hydra would look like. I also liked that some of the weapons we were shown in the previous books featured in battle.

Towards the end of the book, some of the descriptions and accompanying images got to my brain and tummy. I had to keep stopping, and Miss 8 looked like she wanted to hurl as well. But we fought through it. She doesn't normally get that queasy so I think that Mewburn and Bixley out-did themselves this time! There is one thing that worried us at the end of the book and it isn't resolved. We will be eagerly awaiting book 5 and hoping that it doesn't have awful consequences for Merek and his family. Another superb adventure story!

As in the first novel, Charley Partanna, trusted underboss and hitman for the Prizzi crime empire, has fallen for a woman who is not what she appears to be. In this case, it is Mardell La Tour, a showgirl in a Prizzi-owned nightclub.

Mardell is, in fact, the daughter of a wealthy society family, and her showgirl act is only one of a series of identities she has adopted. Enter Maerose, the strong and beautiful granddaughter of Don ... more...