« War of the Worlds review

The Day of the Triffids review 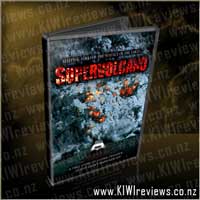 It's the near future and the world finally faces up to the ultimate threat - not nuclear war or a terrorist attack - but the eruption of a gigantic 'supervolcano' simmering beneath Yellowstone Park. This factual drama tells the story of a devastating disaster waiting to happen...

74,000 years ago, the last super-volcanic eruption plunged the world into darkness for six years, heralded an ice-age and reduced the human population to the brink of extinction. The next promises to be equally devastating - and it's already overdue.

Scientists, politicians and the press are the first to sense the imminent disaster, but none can really envisage its cataclysmic consequences. As the bulging molten lava bursts through the earth's crust, local news feeds, diary footage, CCTV, family camcorder and real archive footage follow the ensuing human drama.

As the devastating aftermath across the globe is revealed - environmentally, politically, economically and socially - the post-apocalyptic confusion takes hold. Can the human species ever recover from such a monumental event?

WOW this is one of the best doco-movies I have seen, it was really well done. At first I thought that it was going to be one of those movies with bad graphics like we have seen with some of the dinosaur documentaries that have been on telly of late. Well let me assure you that the science behind the movie is accurate and that this is far better.

The story line is good, the graphics impressive and I think they have pulled the whole thing off in a rather impressive manner. The best thing of all, you get accurate information about the whole scenario should it happen, as the movie is based on a computer model that has been run for this specific event. It is something every new Zealander should watch as it drives home the dangers around volcanoes and what we should be doing to prepare for an eruption on a large scale.

It is also a really good movie to watch as entertainment that is clean and informative.
I would not, however, show the movie to someone under the age of ten as some of the scenes are graphic.

Having lived in the central plateau region, right under the dustcloud shadow of the Ruapehu eruption I know what it means to live in constant fear of an eruption. I moved away when Mt. R popped its cap and sent the sky black over the farm I was working on. We lost most of our stockfeed crops and more than a few sheep died coz of breathing in the dust. Because of that, this movie really held my attention. Not to mention I loved the holographic display and the funky technotoys that managed to still work when everything else had died.
Though this claims to have a very 'human drama' focus, there was a lot more to it. The science underneath the story was all valid, and the way in which it was presented was all too convincing. If Yellowstone does awaken, we're all in very big trouble, regardless which country you reside in. I was especially impressed with the informal nature of some of the 'real' footage. It really turned this away from being a glossed-over documentary or a fictional movie, and made it far more solid and potential to me. It was staged as though it had already happened, or was happening right now. Although originally it looks to have been formatted as a TV miniseries, it viewed well as a single movie.
The special effects were second to none, right up with Star Wars or The matrix, and in some places it struck me they were much more realistic and less 'generated' or 'drawn'. It looked like real footage! There were a few scenes that reminded me of some of the more dramatic scenes from "Twister" and "The Day After Tomorrow", both movies that deal with extreme weather and it's effects on us mere humans, and both of which made big impressions on me.
If you want to see what 'the worst case scenario' MIGHT be, so that you can be ready WHEN one of them happens, then this is a movie you should really have. It's part of 'the big picture' that oh so few people are really able to look at.