Shaun of the Dead review 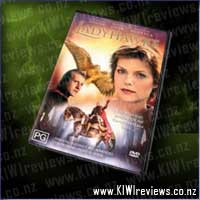 The story of a love that can never be consummated. He is a wolf by night and she, a hawk by day - destined never to meet in human form, unless they can reverse the evil spell cast upon them. An exciting, action-packed suspense adventure.

Ladyhawke is a thoroughly enjoyable 'medieval' fantasy of passion, jealousy, betrayal, curses, redemption, enduring love, revenge, and resolution. Although more ardently a SciFi fan, I confess to having watched this movie at least three times over the years (first came out in 1985).

The two most appealing characters in this story are a thief named Phillipe Gaston (known as "Mouse") and an old hermit priest named "Imperious". Mouse is quickly revealed to be both daring and fearful, as well as naive, and very likeable. His earnest conversation and bargains with God throughout the unfolding events are most entertaining. I think it is fair to say the story of the cursed lovers and obsessed bishop is an intriguing excuse for a great environment in which real point of interest is to follow the character development of Mouse and the redemption of Imperious (who was inadvertently responsible for the curse being place upon Captain Navarre and Isabeau in the first place).

As well as a good tale, there is some great scenery in this movie. Definitely worth a watch.

This is one of those classic fantasy films that defined the genre for me when I was growing up. My favourite character, Mouse (Matthew Brodderick in one of his early roles) was a rather unlucky thief who could often be found having one sided conversations with God - whether complaining or making deals such as "I will never pick another pocket again if you would only...."

Mouse's adorable innocence balances out the much darker character of Captain Navarre (who is understandably angry about the curse which keeps him apart from his beloved Isabeau).

I remember, as a kid, that there were a couple of really scary scenes, but now, I'm not sure why they terrified me. I also got a whole new layer of implied meaning and backstory when I watched it again. Probably suitable for all ages, though younger children may not fully understand what is going on.

Score: 10.0
Product reviews for listing 3788: How to Train Your Dragon -  Director: Dean DeBlois