ProdID: 625 - War of the Worlds
Directed by Steven Spielberg 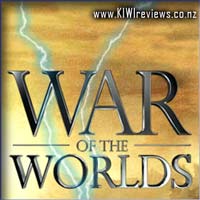 War of the Worlds product reviews

Ray Ferrier is a working class man living in New Jersey. He's estranged from his family, his life isn't in order, and he's too caught up with himself. But the unthinkable and, ultimately, the unexpected happens to him in an extraordinary sense. His small town life is shaken violently by the arrival of destructive intruders: Aliens which have come en masse to destroy Earth.

As they plow through the country in a wave of mass destruction and violence, Ray must come to the defense of his children. He also learns to see outside of his own life, and sees the world try and defend itself from this new and very advanced enemy, not of this world.

As a young lad, I was enthralled and thrilled, delightfully terrified by my first encounter with 'bad aliens from space' when I got to see the video of the 1953 original version of War of the Worlds. I sat on the edge of my seat, squeeking in fear as the giant alien machines climbed up out of glowing pits and scorched everything around them, then sowed the seeds of ravaging red martian plants. I thankfully didn't notice some of the smaller details back then. Some of the antics I saw in the modern remake would have given me screaming terrors for weeks on end. So it was with great interest i sat in the darkened theatre and watched Tom Cruise make lucky-fluke escapes time after time against all odds.

While watching this, I figured out pretty quick that there wasn't much in the way of plot-elements that I hadn't seen already, however the special effects employed these days allowed the cameras to get closer to the aliens, the technology presenting the viewer with opportunities never possible before. The story itself scores low, since it made no real effort to re-tell the story, it simply re-states the original, pedanticly so. However the special effects made up for it, keeping me sitting there trying hard to ignore the rude sod sitting next to me talking the whole way through the movie in some asian language I could not define.

However, I had to laugh at the multi-colored lights just prior to the probe entering the basement to sniff out Tom and fellow refugees hiding, waiting, hoping. This is a reference to the red, blue and green lights from the probe in the 1953 version of the film. What makes this a nifty reference was that the probe in this movie only emitted cyan and white lights. However, the aliens who wandered in shortly afterwards broke any chain of similarities, since they were far more nimble and articulate, being fully-virtual and thus immune to the ravages of real-world gravity and puppetry limitations. Actually, they were too smooth. After all, as natives of Mars, they would be adapted to a substantially lower surface gravity. Their technology may have kept them safe, but only while the critters remained inside it. Outside, they should have collapsed, not walked on walls.

It was nice to see Gene Barry and Ann Robinson, stars of the 1953 original, play the Grandparents. It just gave that much-needed tie-in that stopped this one from being a total shocker. However, despite the numerous references, similarities and sideways-honours for the '53 classic, this remake simply lacked something.

Overall, it was TOO close, in that it left nothing genuinely shocking to a viewer with today's jaded palate. We've seen some seriously nasty stuff on our screens... so the sheer thrilling horror from the classic simply doesn't translate into shocking by the current benchmark. It's only major downfall, caused by over-dedication to the original. Still worth seeing, and if you are new to Scary Sci-Fi, you might really enjoy this. But if you are a die-hard, you'll walk away with a smile, and a hollow spot inside.

Soar away on a magic carpet ride of non-stop laughs and thrills in one of the most spectacular adventures of all time! Now meticulously restored and enhanced - experience the wonders of Aladdin like never before - from the Academy Award-winning music to the unforgettable moments of sidesplitting comedy and soaring adventure.

In the heart of an enchanted city, a commoner named Aladdin and his mischievous monkey Abu battle to save the ... more...