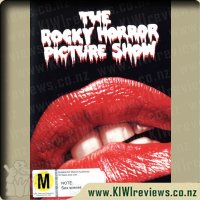 "It was great when it all began..." Celebrate 25 years of midnight movie madness!

I grew up with this movie, so I've always loved it, getting my husband to watch it was a whole different story and it took me a couple of years to get him to sit down and watch it, once he did he was hooked.

Rocky Horror Picture show is a very strange movie, it's about a newly engaged couple that have their car break down and they seek refuge from the storm in the castle of Frank N. Furter. What follows is a strange night including sex, murder, dinner and dancing. Tim Currey is blimming brilliant, he also played Frank N. Furter in the stageshow, playing the transvestite so well that he created such an iconic character, and damn does he look good in those fishnet stockings. ;)

Even if you haven't seen the movie, most people will know the song "Time Warp", "It's just a jump to the left, and then a step to the right, put your hands on your hips, and bring your knees in tight and it's the pelvic thrust that really drives you insane, let's do the time warp again." Hot Patootie is a big favourite, especially as it is done by Meat Loaf. The songs are so much fun and extra catchy, the 25th anniversary DVD also has an extra song on it for added fun.

I swear, if you haven't seen Rocky Horror Picture Show at least once then you need to watch it, it is very bizarre but that is part of what makes it so freaking awesome.

Sam (Academy Award winner Colin Firth) and Tusker (Stanley Tucci) have spent twenty years together, and they are as passionately in love as they have ever been. However, in the two years since Tusker was diagnosed, their lives have had to change. As Tusker's condition has progressed, Sam has been forced to place his life on hold and become his partner's full-time carer, and their time together has become the most important aspect of ... more...