« In the Name of the King review 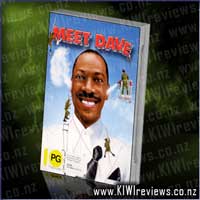 Disclosure StatementFULL DISCLOSURE: A number of units of this product have, at some time, been supplied to KIWIreviews by Roadshow (NZ) Ltd or their agents for the purposes of unbiased, independent reviews. No fee was accepted by KIWIreviews or the reviewers themselves - these are genuine, unpaid consumer reviews.
Available:
January 2009

It's not that he's clumsy, shy or dressed for disco that makes Dave Ming Chang different from everyone else in New York City. It's that he's an alien. More accurately, he's an alien spaceship, on a mission to Earth to save his home planet.

Torn between the voices in his head - a tiny alien crew led by a high-strung miniature version of himself - and the world around him, Dave struggles to appear normal. But when he falls for an Earth woman, the consequences are hilarious in this clever comedy.

Hilarious! I haven't seen much of Eddie Murphy since he showed up as 'G' in "Holy Man". It was great to see him on the screen again, and this role really was worth watching.

It was a really strange premise for the plot... a bunch of tiny aliens coming to Earth in search of a missing probe, and then discovering all the 'normal' things about life on this ball of rock from a new perspective. We're a funny species when you look at us from the outside.

I found this movie quite hard to review actually, as it isn't exactly a 'deep' plot, and as such commenting on any of the really good scenes will basically reveal most of the movie and remove the enjoyment of watching. However I can say that though the plot is predictable, there are plenty of moments where hilarity will ensue. I was having to muffle giggles in order to hear the dialogue. This was *not* an easy task, I assure you.

Overall, a pretty good, if somewhat shallow, comedy that is quite family-safe. Rated PG, even the younger ones can sit and enjoy. So the next time you see someone acting a little wierd and spaced out... maybe, just maybe... they are.