« Things In The Sea Are Touching Me! review 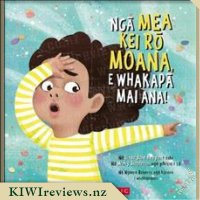 Disclosure StatementFULL DISCLOSURE: A number of units of this product have, at some time, been supplied to KIWIreviews by Scholastic (NZ) or their agents for the purposes of unbiased, independent reviews. No fee was accepted by KIWIreviews or the reviewers themselves - these are genuine, unpaid consumer reviews.
Available:
March 2019

When a small child goes to the seaside with Mum and Ma, she is unprepared for "things" floating in the water. Ma explains what each one is, and that it is nothing to be afraid of ... and then gets a big fright herself when Mum grabs her ankle!

You'll squawk, screech, yelp, and laugh out loud at the surprises for all on this funny-sunny day at the beach. The simple. bold colours are perfect for young children. Themes include diversity, dealing with fear, outdoor education, and the seaside.

One of my goals this year has been to increase my knowledge of Te Reo before I head back into teaching, so seeing Nga Mea Kei Ro Moana, E Whakapa Mai Ana! pop up for review I grabbed it to read. The book itself really well made and presented with amazing illustrations and quality pages, which, when you have three children, will realise that durability is important. I love that this book has both an English and a Maori version - celebrating our diverse culture in NZ.

My son decided he wanted to read it first, so we sat down together and started reading. I had been through the book already, practising my pronunciation and making sure I knew what some of things touching the tamāhine in the book. The little girl starts out super excited and happy to be going to the beach, and very quickly panics as she imagines what mysterious things might be touching her under the water.

Like all GREAT books, this books repetition really helped my son get involved in the story - as he would be able to "read" them himself, and now he even says Ata! himself when he gets a fright - I have to resist the urge to ask what is touching him! The glossary at the back was really helpful as there were a few words I had no idea of, and did not want to keep bugging a friend with "what about this word"!!

We really enjoyed reading this story, and it will definitely be re-read. I still giggle every time my son exclaims Ata! at things though - that has definitely been something that has stuck with him! 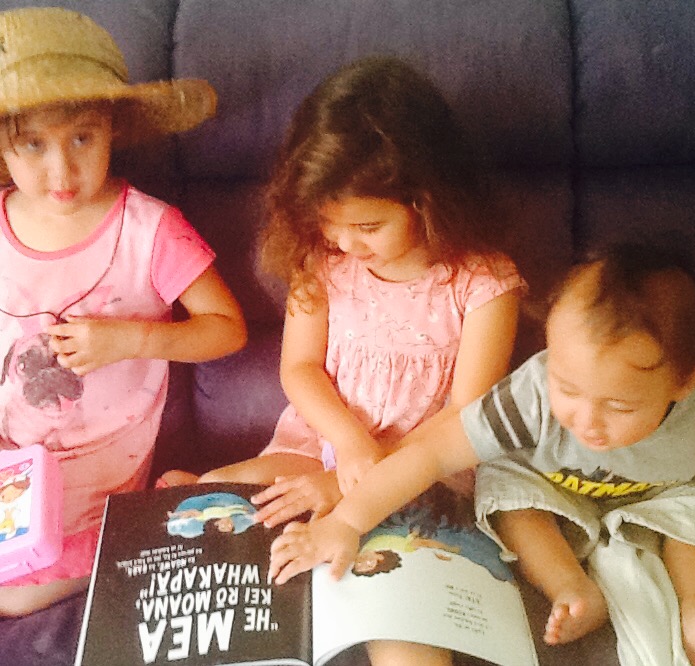 Now that the twins are at a kura, they are keen to use their reo as much as possible. It is a delight to watch such small children chatting competently in two different languages and welcoming the chance to read another book with me which is written entirely in Te Reo. Even their little sister and brother joined in so I ended up on the sofa with all four children plus their father, looking at the pictures and reading the text with them. We had a ball, with the children ending up in fits of giggles each time the little girl in the story panicked when something mysterious touched her. They are all waterbabies, jumping in their paddling pool when the weather is warm and they can't get away for a real swim, so they instantly recognised all the "threats".

I love the way the book uses repetition each time the child gets a fright. By the time we were reading the book through for a second time (because you can't read it only once!) they were anticipating the words: as soon as I shouted "Ata!" they joined in with "Titiro ki te wai e Ma!", and when we got to the bit where Ma reassured the little girl with "Kei te pai!" they all joined in after the first word. Even Mr One was concentrating fully, whether or nor he could follow the entire story; he loved the colourful pictures and tried to join in with the repeated words along with his sisters.

The story is simple and very relevant to small children. They knew all about crabs and seaweed and floaty bits in the water, and assured me that they would not be afraid in the same circumstances. When we reached the end of the story where Mama plays a trick by pretending to be a seaweed monster, all four of them found it so hilarious that Mr One fell off the sofa because he was giggling so hard. I am not sure if he was old enough to understand why it was so funny, but because his sisters and father were all laughing he could not help but join in too.

The story is very kiwi in flavour. The whole concept of putting on your beach clothes and heading for the water on a hot day is familiar to everyone. The twins pointed out the hats and jandals straight away, and asked if I would like to see theirs! The seaweed tendrils, dark and hand shaped, were the source of amusement rather than fear; even though the picture was quite stylised, they recognised it for what it was and laughed at the little girl for being frightened by it. Both girls liked the pictures of the whole family swimming in what appeared to be quite deep water in places. (I was assured several times that they are both excellent swimmers too!)

There are messages on several levels in this book which are relevant to children. Water safety, of course; although she is scared several times in the story, the heroine knows to ask an adult for help - she is never left to swim on her own. Ma and Mama are always there to come to the rescue. Sun awareness is also a theme. Both adults and their little girl wear sunhats and they carry beach bags so one would assume that these contain sunscreen and water bottles. New Zealand's clean green image is promoted through the clarity of the sea water and the abundance of creatures on the foreshore and in the water itself. And diversity is presented through the child's having two mums, both of whom are looking out for her.

At the back of the book is a glossary for those who may not be completely fluent in Te Reo; this is always useful as it encourages parents (and teachers!) to use the language with their children in the knowledge that there is this support available. And, of course, there is an occasional word which varies according to which region they are in; I sometimes find there is a word which is quite different from the version I am familiar with, so I make a point of double checking if there is something I don't get. It is ok to look up an unfamiliar word and to admit it if you don't understand. That is good modelling for the children - both can learn together.

It's been six months since Evie fled the International Paranormal Containment Agency with her shapeshifter boyfriend, Lend, and she finally has the normal life she's always dreamed of.

But when her faerie ex-boyfriend shows up hinting of a battle brewing between the faerie courts over Evie herself, she realises that she hasn't left her not-so-normal past far enough behind...