Pirates of the Airwaves review 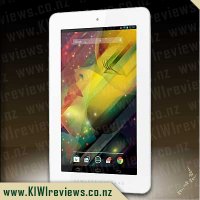 Disclosure StatementFULL DISCLOSURE: A number of units of this product have, at some time, been supplied to KIWIreviews by HP NZ or their agents for the purposes of unbiased, independent reviews. No fee was accepted by KIWIreviews or the reviewers themselves - these are genuine, unpaid consumer reviews.
Available:
at selected quality retailers

Finding a good tablet these days would seem to be easy, with so many options on the market and more appearing every day. Still, while that opens up options, it also means that every good tablet has a better one just around the corner and a good deal today may be a bit of a lame duck by next week. Looking into this tablet in some detail, it has some good features as well as some fundamental shortcomings that may see it rapidly off the shelves in favour of another brand.

Pitched at the entry-level market, this tablet has some trade-offs that make it one at least worthy of consideration under some circumstances. Looking at it, it does have some of the style first brought about by the iPad but with a nice brushed-aluminium backplate that gives at least the illusion of sturdiness, but also a nice feel in your grip. The sound is also pretty good for a 'budget' tablet, with most of the audible range pretty strong, although as with all slimline speakers it does have a weakness in the base. Nothing particularly untoward there - nothing an external speaker doesn't quickly solve. However, I was quite surprised by the sheer power it could push through those speakers, giving it a good range of volume - great for those who want Spotify on in the background while they work. Another feature I was very pleased with is that it supports the USB OTG format, meaning that as long as you have a suitable pendrive, you can utilise external storage with ease, although I am not sure about having the USB plug on the top edge of the device.

It does come with a rear-facing camera, although the quality is nothing to rave about. It's good enough for those impromptu family snapshots or scenic shots that don't require much in the way of detail - fog over the hills in the morning kind of shots - but that is really about all. At a mere 2mp, this is not a camera that anyone who wants crystal clear images will want to use. I have to question why it's such an inferior one, when 5mp camera are of the same size, and about the same price. It's almost embarrassing to note that my under-$100 phone has a far better camera than this tablet. I also found that Instagram refused to install on this device, claiming a lack of compatibility despite it running native Android 4.2.2. Really, REALLY strange... but with these cameras, I'm not hugely upset.

Significantly, the one key feature that may have redeemed this tablet for me - Bluetooth - is the one feature that is utterly lacking. The lack of Bluetooth is a little hampering in today's connected world, where the ability to share internet using your iPhone's "Personal Hotspot" setting is almost a necessary foundation feature. If you are running an Android phone however, you should be able to make use of the "Tethering" option which takes over the WiFi circuit to make the connection between the tablet and your phone. However, when I tried it, I am not entirely sure why, it was erratic at the best of times, so I decided to test the WiFi directly. In the testing area, I utilise a WiFi access point with beamforming technology - a system designed to triangulate the direction of connected devices, and shape the signal to ensure the strongest possible connection is made. I have a signal analyser installed on my phone, and it was showing me that the beam hitting the tablet was doing so at peak strength at just -29db which is as strong as I ever get on any WiFi device in that room, yet the tablet still dropped the connect twice in the span of 5 hours. Yes, they were very brief drop-outs and it only added a few seconds to the file transfers I was running to keep the connection fully active, but still... it's the only time I have seen a tablet do that under such ideal signal conditions.

Processing-wise, it's about par for the budget range - some of the more interesting games available will play, but it's laggy and juddering for a quad-core CPU if you put too much load on it. This is not one for the kids, despite the easy-to-afford pricetag. They *will* hate it and nag you for a better one. Kids these days, eh. In fact, I struggle to see what HP were thinking when they whipped up the design. While it's not the nastiest bit of kit around, it certainly takes one of the lowest spots on the ladder for tablets in this price range, and some older hardware from other brands can still outperform this. The battery is also very middling, with around 4 hours solid use at "full power" and up to 5.5 hours at "low power" usage... and it heats up pretty quick when you start to put a load on it.

Overall, it's an OK tablet if you only want to do the basics, can tolerate the annoying buttons that are recessed into the case, making them awkward to press - volume controls especially - and don't mind being mostly-disconnected from all the channels floating around the radio spectrum. If you really want it though, my best bit of advise begins with "Download a better on-screen keyboard" and ends with "Buy a mouthguard" to help you cope with all the times you'll want to grind your teeth in frustration. Here's hoping the majority of 'soft' issues get fixed in a firmware upgrade in the very near future.

Packed with power. Made to move. This 43.9 cm (17.3") laptop combines powerful performance and incredible graphics into a revolutionary new design - perfect for immersive gaming.