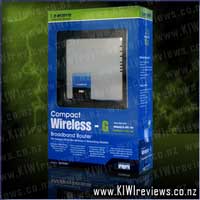 Disclosure StatementFULL DISCLOSURE: A number of units of this product have, at some time, been supplied to KIWIreviews by LinkSys or their agents for the purposes of unbiased, independent reviews. No fee was accepted by KIWIreviews or the reviewers themselves - these are genuine, unpaid consumer reviews.
Available:
at quality retailers

The Linksys Compact Wireless-G Broadband Router is really three devices in one small box. First, there's the Wireless Access Point, which lets you connect both screaming fast Wireless-G (802.11g at 54Mbps) and Wireless-B (802.11b at 11Mbps) devices to the network. Use the built-in internal antenna, or add an optional external antenna for more range.

There's also a built-in 4-port full-duplex 10/100 Switch to connect your wired-Ethernet devices together. Connect four PCs directly, or attach more hubs and switches to create as big a network as you need.

Finally, the Router function ties it all together and lets your whole network share a high-speed cable or DSL Internet connection.

More details can be found at: the LinkSys website

First impressions don't always count for a lot, especially these days when a sleek case can hide either a tiger or a lame kitten, however my first thought on seeing this unit was "That's tiny! So where the router?"... of course further unpacking and examination revealed that this tiny, sleep litle mini-brick was in fact the unit, just in a nifty compact format. Measuring less than 10cm square by about 3cm thick, this is about half the size of it's bigger kin, such as the unit designed for Vodafone 3G, but contains pretty much the same features as you would expect from any router. 4 ethernet ports, plus a socket to hook into your broadband gear, all crammed up together on the back.

However, there are downsides to this compact format, such as difficult access to the reset switch, and the indicator lights are not very well isolated from each other, meaning that when one LED lights up, you get 'bleed over' into adjoining indicators. Now, when the lights are flickering around like mad, it all becomes a bit of a blur and hard to see what's going on. They could take a trick from the photographic filter fraternity, and paint the edges of the LEDs with matt black paint, to reduce side-light.

So, on to testing... since we had a wireless network and some Broadband access jacked up (at least until the council managed to chop the main lines in half during some roadworks) we put it right to work... setup was pretty familiar to anyone who has used LinkSys gear before... and as usual, initial setup must be done via a cable-connected PC before you can go entirely wireless. A few tweaks are necessary to give optimum performance, such as adjusting the MTU down a notch to avoid collisions and keep the connection stable and crisp, but really that's not too much of a biggie. The interface is tidy, but I wouldn't say it's the best they could have done, so be on the look-out in case they decide to ramp it up to join the 21st century.

Security-wise, again this unit supports the now-seriously-unappealing WEP, but also WPA and WPA2, and comes with all the firewall bells and whistles that are a sad necessity in today's online life, thanks to the script-kiddies and black-hats. Be sure to configure them well, to avoid coming home to find a crowd of cars parked outside full of geeks trying to look innocent, and all your broadband data cap blown through.

The biggest downfall of this tiny unit is the internal aerial. Though it is quite suitable for connecting within a room, we found that it wouldn't really punch through walls too well. Our signal dropped to about 40% less than a foot the other side of a standard wall, and down to 5% by the time we were 6m further away. Two normal walls was enough to kill the signal totally... so we pinched the aerial off the WRT54G3G and noticed that we could just get a signal lock 2 rooms away. Undoubtedly if you wanted better than that, you'd have to go for a repeater, get the larger enhanced aerial, or start looking at something like the WRT350N.

Overall, though it's got a few issues with functionality in multi-room situations, this tidy little box sure has some big shoes, despite it's dainty footprint. For those who value discrete, tucked-away hardware, you can't go past this. In the end, we decided to mount it to a wall behind a printed-canvas painting stretched over a hollow wooden frame. The canvas is utterly transparent to the signal, but not to our eyes, and unless you know where to look, you'd never notice it. Seriously! This has to be the ultimate (so far) in subtle hardware, and well worth considering if you just want to cover the one room. In our tests, speeds range around 14mbit for wireless, and a touch over 47mbit for wired connections. Not great, but too shabby really.

Experience beauty and power that goes beyond expectations with the HP Elite x2 1012. It's a tested-tough 2 in 1 with precision-crafted keyboards, and a thin and light powerhouse designed to the exacting standards of the enterprise.

Mobility and style without compromise
Strikingly thin and elegant, the Elite x2 ... more...