« Shark in the Park on a Windy Day! review 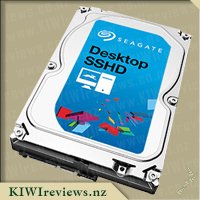 Disclosure StatementFULL DISCLOSURE: A number of units of this product have, at some time, been supplied to KIWIreviews by Seagate Technology or their agents for the purposes of unbiased, independent reviews. No fee was accepted by KIWIreviews or the reviewers themselves - these are genuine, unpaid consumer reviews.
Available:
at selected quality retailers

Solid State Hybrid Drives deliver speed and capacity for gaming and high-performance desktop applications.
•  For a richer gaming experience, Seagate SSHDs deliver faster map load speed for non-stop performance and play
•  Get the kick of an integrated solid state drive (SSD) with the massive 4TB capacity of a hard drive - all at a surprisingly low price!
•  Boots Windows 8 in less than 10 seconds
•  Performs up to 5x faster than 7200 RPM desktop hard drives*
•  Improves overall system responsiveness by 30% or more

Get Up to 4TB of Gaming Storage on Your Desktop
Now you can store all your video games on one drive with fast access. Averaging 25GB per PC game, you could store up to 40 games per TB!
•  No need to un-install games to load new ones
•  Available in 1TB, 2TB and 4TB capacities
•  Includes 8GB integrated NAND Flash

Affordable and reliable SSHD for your desktop
SSHDs fuse the strength of SSD and HDD into one affordable and powerful device. You'll be surprised at how little you have to pay to get SSD-like performance in your desktop system.
And since SSHD fuses the strengths of both HDD and SSD technologies, you get the combined reliability of both in a solid state hybrid drive product.

If you want a spreadsheet of figures about read/write times, latency, spin-up/-down delays, etc... go check out an uber-geekery site. What I wanted to focus on was one key question: "What does it do for me, in simple terms?" The short answer is, it made my system faster and more responsive than it has ever been, and I know it could make the system even better if I were to use this as my boot drive.

So... what is an SSHD Hybrid Drive, really? To make it clear, an SSHD is NOT a "Solid State Drive" - it's a hybrid... a regular 7200rpm HDD but with a huge 8GB SSD RAM buffer on it that holds regularly-accessed files. Big files, or files accessed infrequently, go to the HDD. The intelligent memory manager adapts to your usage profile, making sure that files you access regularly are kept in the best place - the SSD "ram buffer". Old-school computing nuts like me would recognise this technology as an integrated RAM 'Virtual Disc' - something I made excellent use of with my old Amiga 4000 machine when I was running a BBS. Because nothing says "insomnia" like a hard-drive whirring away all night next to your bed.

I see it kinda like this... Imagine a big tank of water, on top of which is a layer of thick syrup. Files are like rubber balls - they will sink, but they sink slowly through the syrup... so if you are reading and writing them regularly, they usually stay near the top, where you can find them, and grab them, quickly. But if you don't touch a ball for a while, it eventually falls through the syrup and sinks into it's little cubby in the main water tank, to be dug up when you need it later. If the ball is too big, it won't float in the syrup, and falls straight through into the main compartment.

So... if you used one as your boot drive, it would probably hold things like your swapfile in the SSD component. In my case, I am using it as my main Photoshop cache drive, so all of Photoshop's temp files get held in the fast RAM. I have already clocked a 25-28% speed boost when working with 'big' ( <500mb) files, and an 18% speed boost when working with even larger ( >2gb) files. While I also thought it may work well as my video editing cache too, it didn't offer a significant performance boost, probably because the cache was being hogged by Photoshop files, as I have set that as the "top priority" amongst the Adobe app cluster.

Overall, I love this drive! I had a couple of older model drives in the box, each partitioned into two working drives for a total of four 'drive letters' and the power drain was such that at any given moment one of the drives would shut down, then need to be accessed and power up with a scary clicking noise while the other drive lost power and shut down. Replacing both of those 1TB drives with this 4TB drive gave me more space, halved the power consumption, and stopped the scary "death-watch beetle' noises. For the price, there's nothing I would rather have in the box short of a 4TB SSD... but since they are neither on the market nor likely to be even close to the same price bracket, I'll chhose this drive hands-down any day!