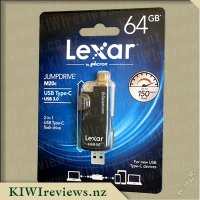 Disclosure StatementFULL DISCLOSURE: A number of units of this product have, at some time, been supplied to KIWIreviews by Lexar or their agents for the purposes of unbiased, independent reviews. No fee was accepted by KIWIreviews or the reviewers themselves - these are genuine, unpaid consumer reviews.
Available:
at selected quality retailers

Designed for use with latest generation of devices with USB Type-C connectors, the Lexar JumpDrive M20c USB Type-C flash drive provides a seamless way to move transfer and share content between your Type-C enabled smartphone, tablet, and computer. This high-performance 2-in-1 solution makes quick work of transferring files on the go.

Manage your content on the go. With today's overflow of content - created, captured, and consumed - it's easy to run out of space on your smartphone or tablet. Now you don't need to delete your favorite photos and videos to make room for more.

Any which way is up. No more fumbling to put your USB flash drive in the right way. The USB Type-C connector has a reversible design, so no matter which way you use it, it's the right way.

Move files at USB 3.0 speeds. Powered by USB 3.0 performance, JumpDrive M20c makes quick work of offloading files. With read speeds up to 150MB/s*, you can transfer a 3GB HD video clip in less than one minute - compared to the 4 minutes it takes using a standard USB 2.0 drive.** And for added versatility, the drive is backwards compatible with USB 2.0 devices.

Convenient portability with a protective cap design. JumpDrive M20c sports a clear end cap with key ring loop, making it easy to attach to a bag or keychain and go.

Expand the memory of your USB Type-C mobile devices. With capacities from 16GB to 64GB, JumpDrive M20c also lets you offload lots of content from your tablet or smartphone to create more room, and also provides a great way to back up files. The simplest thing about USB Type-C is using it. The plug is fully reversible, so you don't need to fumble around trying to figure out which way up to plug it in - that answer is always "Yes." The HARDEST thing about USB Type-C is trying to find a device that's on the market at the moment that actually uses it. While it is the 'coming supreme standard' - with it's powerful flexibility and built-in future-proofing - it's still *very* early days for the consumer market... so trying to get this device tested was a bit of a mission.

In the end, I had to get a bit sneaky... and made careful but authorised and supervised use of some cutting-edge demo notebook machines at a few local retail stores. I was paranoidly careful to ensure the device was free of any and all malware - scanning with three anti-malware packages to ensure no rootkits, plus a full wipe of the drive between devices. Testing the read/write times proved to be a bit hit'n'miss, so I averaged the results from five tests of each function. My workstation PC has USB 3.0 fitted as standard, so testing that was easy, and to be fair I ran the same tests 5 times on that too.

Because I was testing the 64gb version of this device, I was expecting up to 150MB/s read and 60MB/s write - well below the USB 3.0 standard's maximums, but still faster than USB 2.0 on reads, and matching the maximum specs on writes - however realistically I usually expect to get no better than 90% of the advertised scores. If I even got close to 80% of those benchmarks in real-world tests I would consider it a win... so I was stunned to find that the results exceeded my expectations handsomely. The average across the ten tests gave me 141.6MB/s Read (94% of maximum) and 55.2MB/s Write (92% of maximum), and even the slowest result for each exceeded my 80% threshold easily. The best results came on the desktop PC, but I suspect that's more to do with the advanced performance tweaking over a bog-standard default-tuned system.

This unit is compact, stylish, and everything tucks away nicely into the case so it won't get tangled up in your keys... however I did find in tiny UI glitch that really should have been sorted out in the design phase. When you slide the plugs out - either one, since they are attached to each other via the actual storage board itself, the thumb-button clicks into a little notch, locking the drive in that configuration so that the unit doesn't collapse in on itself as you try to plug it in like a shy turtle hiding it's head. However, when you have the unit in 'moving around' mode - with both plugs retracted so they sit flush with the outer protective sleeve - the thumb slider doesn't click-lock, meaning there are times I go to grab the drive only to find one of the plugs is peeking out like a meerkat. How such a tiny thing can cause so much frustration is incredible... almost as incredible as the thought that the designers either didn't think of it, or did and figured it wouldn't be an issue.