I Am Woman review 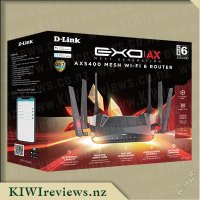 Disclosure StatementFULL DISCLOSURE: A number of units of this product have, at some time, been supplied to KIWIreviews by D-Link or their agents for the purposes of unbiased, independent reviews. No fee was accepted by KIWIreviews or the reviewers themselves - these are genuine, unpaid consumer reviews.
Available:
via online store and selected review outlets

Having a reliable, consistent connection to the greater internet is, for many, an essential part of life today. In the same way that the public plumbing keeps us supplied with water, so too does our internet connection act as the umbilical through which our awareness of the outside world is fed. However, remaining tethered to the physical connection would be utterly impractical to all but the oldest of the old guard, and so high-speed, low-latency reliable WiFi is the key... and the latest iteration of it is the 802.11ax standard and WiFi 6.

I'm not entirely sure if the lead designer is a fan of the Alien movies, or if function drives form in this case, but this unit is sure to catch the eye if you opt to wall-mount it. Looking at it on the office wall, I can not help but think of one of David Bowie's early songs - Ziggy Stardust's 'Spiders from Mars'. When sitting on a table, shelf or bookcase though, this unit loses a lot of its alien-lifeform attitude and becomes more abstract sculpture than anything else. The angular facets, the antennae 'legs/leaves' and the dark colour scheme all combine to give you a sleek, predatory-looking device. It almost gives you the impression it plans to hunt down every last bit of WiFi and drop it at your feet.

Starting with the obvious stuff, the DIR-X5460 is fully featured, with three gigabit-enabled LAN ports, an internet port to connect to your modem, a USB 2.0 port and a USB 3.0 port. It also has six antennae which illustrates it's tri-band functionality. This unit offers concurrent dual-band wireless (2.4Ghz and 5Ghz) for connections up to 5.4Gbps, six simultaneous data streams and BSS colouring which increases range and reduces interference in "noisy" wi-fi environments, where there are lots of devices clogging up the default channels.

Setup is simple and smooth - D-Link have invested a lot of time and effort into making their device setup process as streamlined as possible - and chances are there will be a firmware update to process between you first setting it up and when it actually becomes usable. This is usually only a matter of a minute or two. For the 'leet amongst you, there are plenty of options and settings you can deep-dive into, but for the general Joe User, this is very much a simple, self-driven operation that will give you a solid connection between your wireless devices and the greater digital collective. Now, the only bottleneck lies outside your house, because this little beast ensure you have more than enough room in the pipeline to move data around inside your house.

The speed-tests proved to be somewhat inconclusive, due to maintenance being performed on the network infrastructure outside the office that I wasn't aware of. Unfortunately, with the maintenance set to take weeks, possibly months, to complete, there was no way to ensure I would get consistent and confirmable data on the network speeds. So with that in mind I looked at how well it could move data around within the local network, and just had to pass over wide-area network testing for this one.

There was still a lot of variation in the results based on the type of data, what devices were at the source and destination points, and my position in the house relative to the access point, so I won't pad this out with a table of 120 sets of datapoints... but the simple truth of the matter was that despite the variations that make a trend analysis pointless, even the slowest transfer was 18% faster than the average transfer test I did with my previous WiFi router, and the fastest transfer on this unit took a blazing 41% of the time it took for the same file to move between the same two devices under my old router. Having dual 5GHz channels to carry data between devices makes for simply astounding transfer speeds.

With WiFi 6 now emerging into the mainstream, it may not be easy to appreciate why having this functionality now is great. While it is early days, as the standard becomes more commonplace, you'll see software tweaks that will bring about even more improvements in the transfer process, and will gain those benefits with future firmware upgrades. Assuming we don't see another leap in tech and the arrival of something utterly new to take the throne. I do love seeing foresight in tech, where futureproofing is assured because improvements are assumed, not hoped for.

The only real niggle I had was with the USB. While it is great, having the ability to plug a USB device into this router and share access with the entire user network, it worked really well for a common-access printer that was in storage because it lost WiFi functionality and wasn't affordable to repair. (It would have cost 3x the price of a replacement printer!) However, when I slapped a 5TB portable HDD into the USB 3.0 socket and tried to access it remotely in the style of the NAS box... it failed to connect in a manner I was able to use easily. I ended up having to use FTP instead of a regular window on my desktop. Not a huge thing, but enough of an annoyance to take some of the shine away for me.

Overall though, this unit was brilliant. I spent a lot of time digging through the many layers of settings and menus, and while I didn't want to risk messing with most of them, I did put in a few tiny tweaks that give me extra peace of mind and a few decimals better performance. Would I recommend this to someone asking for my opinion? Sure... but I would warn them that this is quite the beast, and may be quite wildly over-spec for the average home. However, if you have teenagers living at home, if you have heavy gamers in-house, if you like to stream basically everything... then this is certainly the device you are looking for.

The Targus Wireless Optical Stow-N-Go Notebook Mouse features a stow-and-go USB receiver that attaches securely to the bottom of the mouse for added portability and convenience.

The receiver also triggers an On/Off switch to help conserve power when the mouse is not in use for up to 6 months** of battery life. The built in low power ... more...