I, Robot: To Obey review 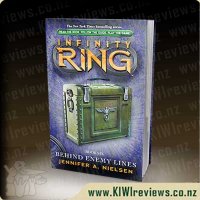 Disclosure StatementFULL DISCLOSURE: A number of units of this product have, at some time, been supplied to KIWIreviews by Scholastic (NZ) or their agents for the purposes of unbiased, independent reviews. No fee was accepted by KIWIreviews or the reviewers themselves - these are genuine, unpaid consumer reviews.
Available:
January 2014

World War II is raging across Europe, and the Axis and Allied powers are in a stalemate. Dak, Sera, and Riq can tip the scales in the Allie's favour ... if they can pull off the most daring spy mission of all time. But even if they succeed, are they playing into the SQ's hands?

I am loving this new Infinity Ring book and in my opinion this one is much better than the others by far because as each book comes out and each book progresses the danger and the excitement just builds up! In the first books it honestly wasn't as attention grabbing as these new books. The cover of the book looks exquisite and suits the story very well. So far I haven't been able to play a episode but it will happen soon. The beginning of this book is very interesting as many dangerous events quickly follow each other. Then the group splits up to fix one of the most dangerous breaks ever with an added challenge; an enemy from the future!

The bulk of this book is very different from the others because the storyline splits up into different paths eventually all the characters are united again in the end of the book. All of the Infinity Ring books move along at a fast pace without any breaks in the storyline. I am guessing that this series is almost at a close and that the final book isn't probably too far off. I am very excited and cannot wait for the last book to come out. I think that this book is ideal for any fans of the 39 Clues series as they are very similar to each other, another thing I like about this series is that the missions/episodes are part of the series unlike the Clues where the missions are just playable content.

I am growing more and more exciting as this series moves closer to it's conclusion (well, one of them, look at the series "The 39 Clues", I have almost every book the series released, and that's 22 books from an originally 10-book series!), so reading this brings that level of anxiety higher! The storyline moved well, it was fluid as well as active. Once again I loved how the book picked up not from the end of the last book, but rather the end of the game episode from the previous book, which both makes the reader feel like they are part of the adventure whenever they play the game.

I was lucky to see that this pattern continued with this book, so my love for the series has still been maintained. I loved the character in this book were great, they were well described and thus the author has been able to bring life to the story like the other authors who wrote the books in this series did, which was a great thing to happen. It was great how the book held a moved from character to character smoothly, but still kept temporary cliff-hangers which acted like ropes tugging you through the book, which for a bookworm like me wasn't a bad thing!

The game episode was fun, there was a glitch with the navigational arrow which points you towards your next goal, but I was still able to complete the game without it. It is a shame that the game episodes in the Infinity Ring series aren't as active as the ones in "the 39 clues", but the books are the most important things, and this book, being the topic of this review, is one I would recommend to other readers, as it was indeed highly enjoyable to me, and the story was laid out in a way that is still active, but potentially enjoyable by audiences young and mid-aged.

As the Goddess embodied, Twylla instantly kills anyone she touches. Each month, she's taken to the prison and forced to lay her hands on those accused of treason. No one will ever love a girl with murder in her veins. Even the prince, whose royal ... more...